How did these acquisitions turn out for Verizon and AT&T?

Verizon (V) acquired Yahoo and AOL over two years ago while AT&T (T) acquired Time Warner this year. Both acquisitions created a buzz at the time of their announcements. In Verizon’s case, many wondered why the telecom giant was picking up two businesses that had pretty much lost their sheen while few others hoped that perhaps Verizon might pull off something spectacular.

The skeptics seem to be having the last laugh now. Verizon is reportedly writing off $4.6 billion from its Yahoo and AOL acquisitions, after having paid over $9 billion for both companies. The write-off of almost half of the combined value is an indication of Oath’s failure to be profitable for its parent.

Oath’s revenue has slowed down sequentially over the past couple of quarters. For the third quarter of 2018, Oath recorded revenues of $1.8 billion, which reflected a year-over-year decline of almost 7%. The business unit is seeing pressure on revenue from search and desktop usage, which comprise the major part of its operations. 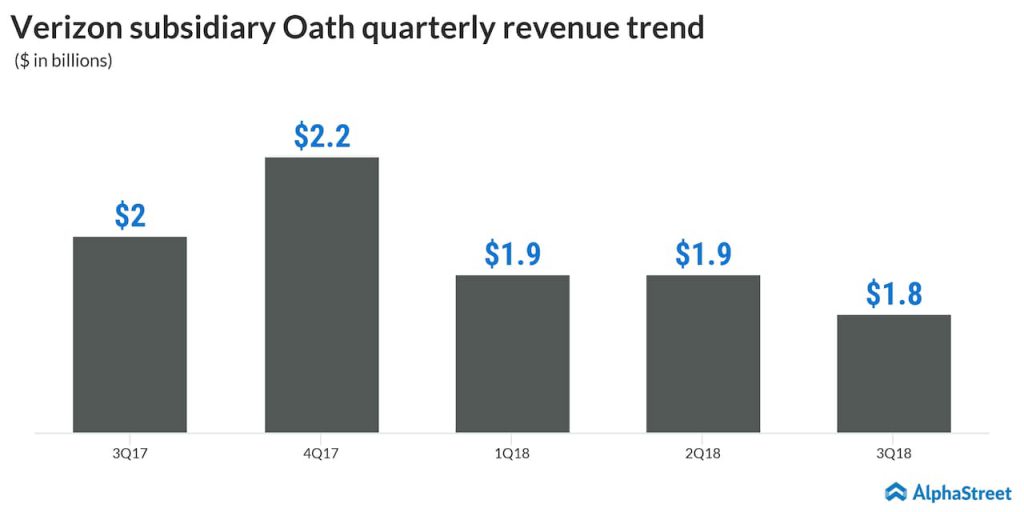 Since Oath expects this weakness to continue going forward, the division does not hope to reach its target of $10 billion in revenue by 2020. Verizon formed Oath with the goal of becoming a formidable force in the online advertising space against rivals like Alphabet’s (GOOGL) Google and Facebook (FB). This plan failed badly as Google, Facebook and Amazon (AMZN) grew to dominate the digital advertising sector while Oath struggled to keep up.

Verizon has altered its strategy under the new leadership of CEO Hans Vestberg. The first major change was the reorganization of its business into three segments – Consumer, Business and Verizon Media Group/Oath. Verizon appears to be focusing more on the expansion of its 5G network, which is seen as a good move. At present, Oath looks like the component that Verizon will have to decide either to revamp or discard.

When AT&T acquired Time Warner earlier this year, there were a lot of discussions whether this was the right move, especially at a time of increased cord-cutting and competition from streaming services like Netflix (NFLX).

AT&T combined Time Warner’s assets into a new division named WarnerMedia and for the third quarter of 2018, the division, along with all its units, posted revenue increases. Total WarnerMedia revenues grew 7% while Turner revenues rose 4%. HBO saw a revenue growth of 2% while Warner Bros. saw revenue increase by 8%. The revenue increases were driven by higher subscription and TV licensing revenues.

Despite this win, some experts believe that AT&T will face challenges going forward in terms of profiting from the Time Warner acquisition and proving its value. As the company brings out new streaming services, it faces the risk of losing its content exclusivity which could hurt affiliate and subscription revenues.

AT&T also took on a huge debt load in order to buy Time Warner and the company must now adopt the most profitable strategies possible to generate enough cash to pay it off. The scope for that appears limited at present so experts do not seem very optimistic on this acquisition either.

We’re on Flipboard! Follow us to receive the latest stock market, earnings and financial news at your fingertips.