IBM starts the year with new vigor. Is the stock a buy?

In the fourth quarter of 2021, the company separated its managed infrastructure services business to Kyndryl

For many service providers, the fast-paced cloud migration has been both an opportunity and a challenge due to the diverse customer needs. International Business Machines Corp. (NYSE: IBM) has gained a footing in the market with its successful hybrid cloud model. In the final months of fiscal 2021, the tech firm’s revenue increased at the fastest pace in nearly one decade, in line with the management’s goal of achieving mid-single digit growth.

The Armonk-based company’s stock experienced several ups and downs in 2021 and entered the new year on a high note, but lost momentum ahead of the earnings release. It got a much-needed lift after the company reported impressive fourth-quarter results on Monday, mainly reflecting the steady growth of its cloud business.

The separation of Kyndryl, IBM’s loss-making business unit, added to the positive investor sentiment. IBM deserves to be on investors’ watch list and can be a good bet for those looking for long-term holding, because the company’s fundamentals are exceptionally strong and it offers high dividends that keep growing. It is estimated that the spin-off would not materially impact cash flows.

Latest statistics show that the aggressive measures to expand the hybrid cloud portfolio are paying off – last year, the segment grew by 20%. The cloud/software business and the consulting segment, another key growth area, together account for about 70% of total revenues. There is enough reason to believe that the current momentum would be sustained in the new fiscal year and beyond.

One of the main risks to near-term growth is the dearth of skilled workers, which made the management hike wages. The higher costs are expected to reflect in profitability in the coming quarters. Also, the company’s cloud market share is much below that of its bigger rivals like Microsoft Corporation  (NASDAQ: MSFT) and AWS, which calls for capital-intensive measures to reduce the gap. 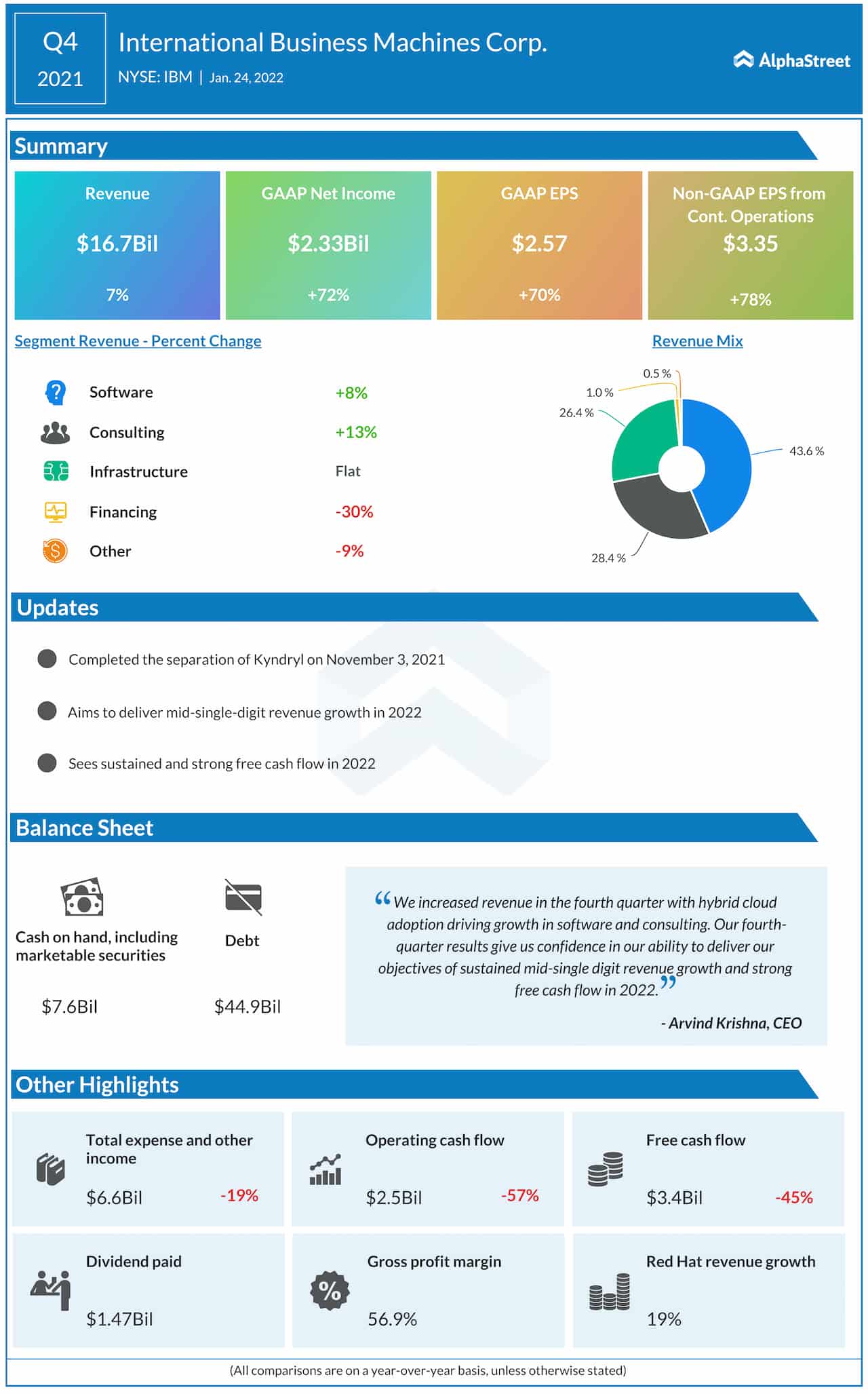 IBM reported a 6.5% increase in fourth-quarter revenues that came in at $16.7 billion and exceeded the market’s projection. As a result, adjusted earnings moved up to $1.35 per share from $1.88 per share in the fourth quarter of last year. The bottom line also topped expectations.

As part of its strategy to deepen focus on hybrid cloud and artificial intelligence, the company spun off its managed infrastructure services business Kyndryl a couple of months ago. Pursuant to the deal, the latter got listed on the New York Stock Exchange under the ticker symbol KD. Also, IBM’s operating segments have been streamlined to better reflect the new model.

IBM has acquired more than a dozen companies since last year to enhance its cloud and AI capabilities, with the latest being Australia-based SXiQ. This digital transformation service provider is specialized in cloud applications and cloud cybersecurity.

“We made five acquisitions in the fourth quarter and a total of 15 acquisitions in 2021. Two weeks ago, we announced the acquisition of Envizi. Many consumers are willing to pay more for products that are made by companies that are more environmentally sustainable. As the world continues to move towards a more circular economy, our clients need the ability to manage and measure their progress. Envizi’s capabilities complement our own and help us respond to that client demand.”

Over the past twelve months, IBM’s stock gained about 13% but underperformed most of its peers. It traded higher in the early hours of Tuesday’s session, continuing the uptick that followed the earnings release.

WMT Earnings: All you need to know about Walmart’s Q1 2023 earnings results

Pinterest (PINS): Here are a few points to keep in mind if you have an eye on this stock

Shares of Pinterest Inc. (NYSE: PINS) stayed in green territory on Monday. The stock has dropped 40% year-to-date and 62% in the past 12 months. There is a mixed sentiment