ImmunoGen (NASDAQ: IMGN) is slated to report its fourth quarter 2018 results tomorrow before the bell. The most anticipated update from the biotech firm would be related to its lead drug mirvetuximab soravtansine’s Phase 3 FORWARD trial progress. Investors would like to know whether the firm is on track to release data in the first half of 2019.

It’s worth noting that the biotech firm doesn’t have any product revenue, which means one can expect it to report operating loss in the near future. The company has been able to conduct research without revenues mainly by inking partnerships with its peers and receive royalty and milestone payments. In addition, it has funded the losses through debt financing.

For the fourth quarter, analysts are expecting a loss of $0.32 per share which is higher than $0.11 loss reported last year. Revenue is projected to come at $12.27 million compared to $39 million in the prior year period.

ImmunoGen has been focusing on developing antibody-drug conjugates (ADC) to treat cancer patients. The company reported a net loss of $46.8 million in Q3, narrowing its loss over last year due to a reduction in expenses. It also reported a deficit of $1.1 billion at the end of last quarter. 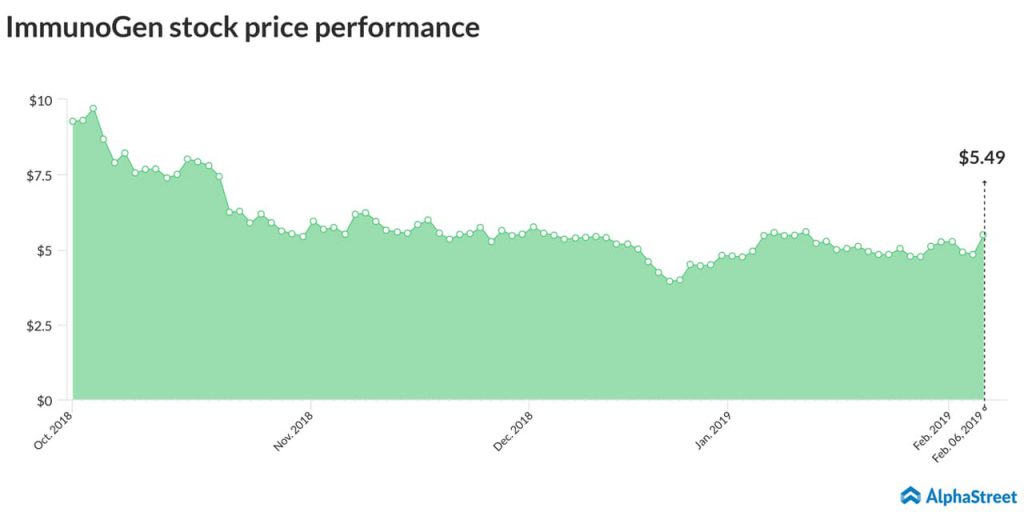 Last quarter, the company has scaled down its sales and cash outlook for fiscal 2018. Revenue is expected to be between $50-55 million and cash and cash equivalents in the range of $250 million to $255 million for the fiscal 2018 period.

ImmunoGen and the investors are pinning hopes on the progress of its lead drug mirvetuximab soravtansine. The drug which is in Phase 3 trials is used to treat patients with ovarian cancer. Analysts are optimistic about the FORWARD 1 trial result, which is expected in the first six months of this year.

2019 is going to be a crucial year for the biotech firm. If things go as per plan, mirvetuximab is expected to get approval from the FDA next year and it has potential to bring in $1 billion over the next decade, provided the drug comes to market in 2020. This would help the company to fund other drug candidates which are in various stages of clinical trials.

Related: Johnson & Johnson will spend more time in court in 2019

In addition to the lead drug, it has IMGN632 and IMGN779 to treat patients with acute myeloid leukemia (AML) is currently undergoing Phase 1 trials. The company is also joining hands with MacroGenics (MGNX) and developing IMGC936 which is used to treat tumor patients. Investigational new drug application (IND) is expected to be filed this year.

The biotech firms stock has dropped 41% in the last 12 months but has recovered by 11% in 2019 due to the optimistic outcome expected for its lead drug within the next few months.