Consumer robot company iRobot Corp. (Nasdaq: IRBT) is set to report its first quarter 2019 earnings results Tuesday after market closes. Analysts view the company’s earnings to decline 17% year-over-year to $0.59 per share and revenue to grow 16% to $251.4 million. iRobot stock slid about 1.5% during the midday hours on Monday and ended down 0.7% at $128.73.

iRobot sells its products directly to consumers through on-line stores and indirectly through resellers and distributors. For the last reported quarter, iRobot’s revenue grew 18% annually to $384.7 million. Earnings jumped to $0.88 per share in Q4 from $0.16 per share in the fourth quarter of 2017. 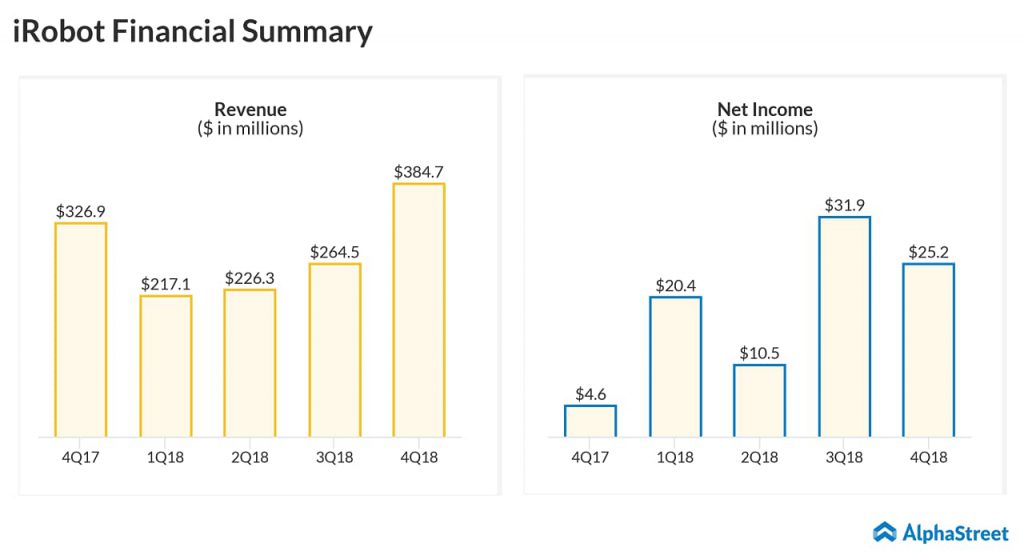 Historically, iRobot had experienced higher revenue in the second half of the year compared to the first half of the year because of seasonal holiday demand. This quarter, investors will be keenly watching on the new product updates from the company and its actions to mitigate the effect of the US/Chinese trade war.

For the fiscal year ended December 29, 2018, sales to non-US customers accounted for 48.7% of total revenue. The Bedford, Massachusetts-based firm outsources its manufacturing of the consumer products to three contract manufacturers, each of which manufactures the robots at a single plant in Southern China.

The ongoing trade war between the US and China has been a major concern for iRobot. The additional 25% tariff on certain goods imported from China has been delayed so far and there have been negotiations going on in this regard between the US and Chinese governments. To mitigate this impact, the company said in Q4 earnings call that one of its contract manufacturers plans to begin partial production outside of China beginning in 2019.