Is it a good time to invest in AT&T (T) stock now?

Telecom giant AT&T Inc. (NYSE: T) has been busy streamlining its business this year, with a focus on divesting underperforming assets and becoming a leaner company. But the company still has a huge debt that could weigh on its ability to effectively deploy capital and meet growth targets.

The communications firm’s top line is experiencing weakness for some time, reflecting the market uncertainties and elevated inflation. At the stock market, it has been a roller coaster ride for AT&T, with the stock paring its early losses and making strong gains mid-year, before entering a losing streak that sent it to a multi-year low.

Keeping a tab on the company’s performance in the final months of the fiscal year would give a sense of where it is headed in 2023 – the fourth-quarter earnings announcement is expected in the third week of January. Currently trading slightly below its 52-week average, the stock looks poised to create decent shareholder value next year. AT&T’s dividend yield is one of the best, and there are not many growth stocks out there that are as cheap as T is.

In what could be a testament to its strong foundation, AT&T has effectively navigated through adversities in the past, including setbacks from the controversial buyout of Time Warner that was eventually spun off this year. The company owes its resilience mainly to the steady increase in subscriptions for both the wireless and fiber networks. Meanwhile, it looks like the worst is over for the firm, and it seems to be on track to return to the high growth path. 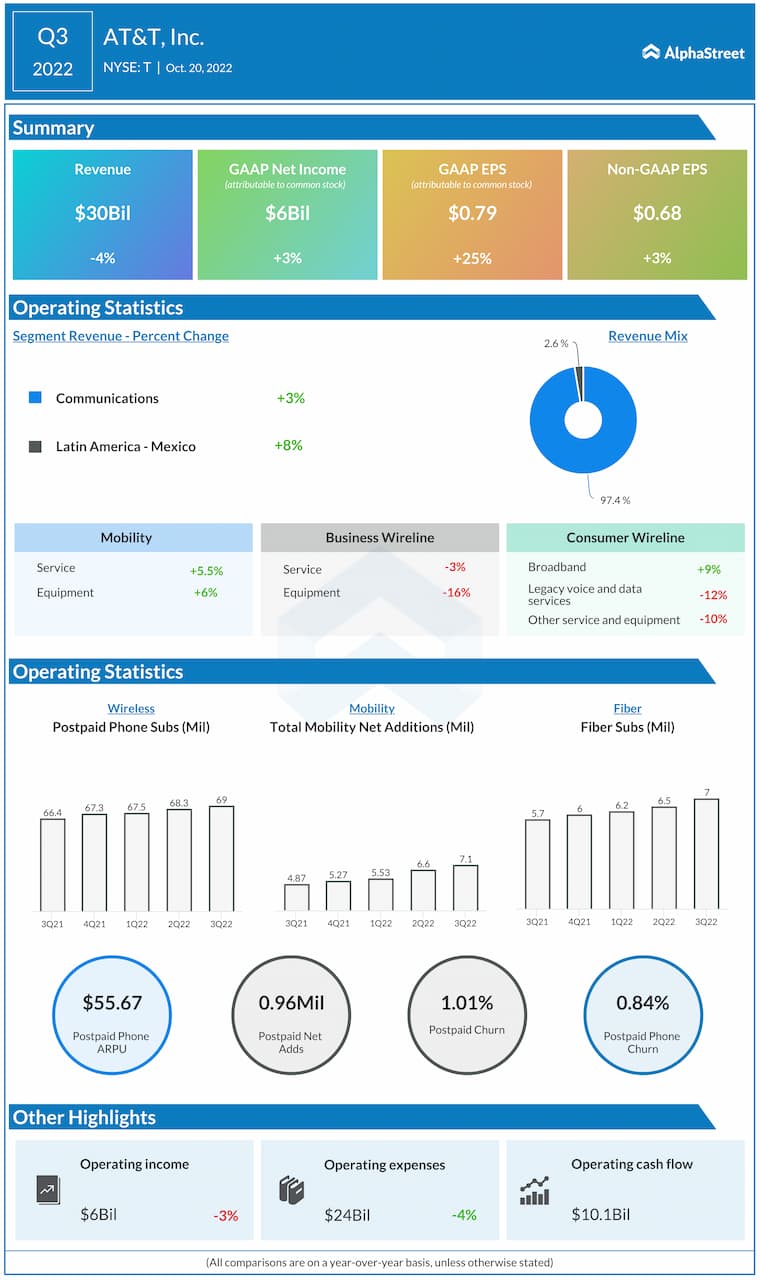 Over the years, AT&T has maintained strong profitability, mostly delivering bigger bottom-line numbers than widely expected. However, the falling revenue is putting pressure on gross profit, thanks to macroeconomic headwinds and lingering pandemic woes. Third-quarter revenue dropped 4% annually to about $30 billion, but adjusted profit moved up by 3% to $0.68 per share.

“The demand for fast and reliable 5G and Fiber is at an all-time high and our disciplined and consistent go-to-market strategy continues to resonate. In addition, as we begin to lap investments we made to optimize our networks, improve our distribution, and transform our business, we’re now seeing the benefits of our growth fall to the bottom line as we suggested they would and as evidenced by accelerating adjusted EBITDA growth.”

Shares of AT&T have been recovering steadily since the last earnings, after losing momentum before. It traded lower and ended the last session down 2.3%, continuing the recent trend.

With Iger back at the helm, Walt Disney looks headed for a transformative year