Is Target (TGT) stock a buy ahead of next week’s earnings?

The company will be reporting third-quarter results on November 16 before the market opens, amid expectations for adjusted earnings of $2.12 per share

Department store chain Target Corporation (NYSE: TGT) has effectively tackled the impact of supply chain issues and store closures, aided by the virus-induced retail boom. But the mounting inflation pressure and recession fears are posing a fresh challenge for the company that generates revenues primarily through in-store sales.

Shares of the Minneapolis-based retailer have lost about $100 since peaking around one year ago, experiencing a series of ups and downs. But the valuation remained broadly stable in the past six months. In general, market watchers are of the view that things are changing for the better, and TGT would rebound and reach its long-term average in the latter half of 2023. Having increased the dividend regularly over the years, the management is likely to continue that policy, giving investors a good reason to hold the stock.

The company has been enhancing its e-commerce capabilities over the years, but continued focus on the brick-and-mortar model makes it susceptible to disruptions like the COVID shutdown. Though store traffic improved significantly as market reopening gained steam, Target’s prospects now depend on the macro situation and the inflation environment. The management is optimistic about its efforts to right-size the inventory to deal with the shift in demand trends, and avoid inventory overhang in the long term.

Meanwhile, initiatives like store remodeling are paying off, while measures like the fulfillment of online orders at stores help reduce costs. These factors should enable the company to ease the impact of high-interest rates and withdrawal of the government’s stimulus and relief programs on sales. 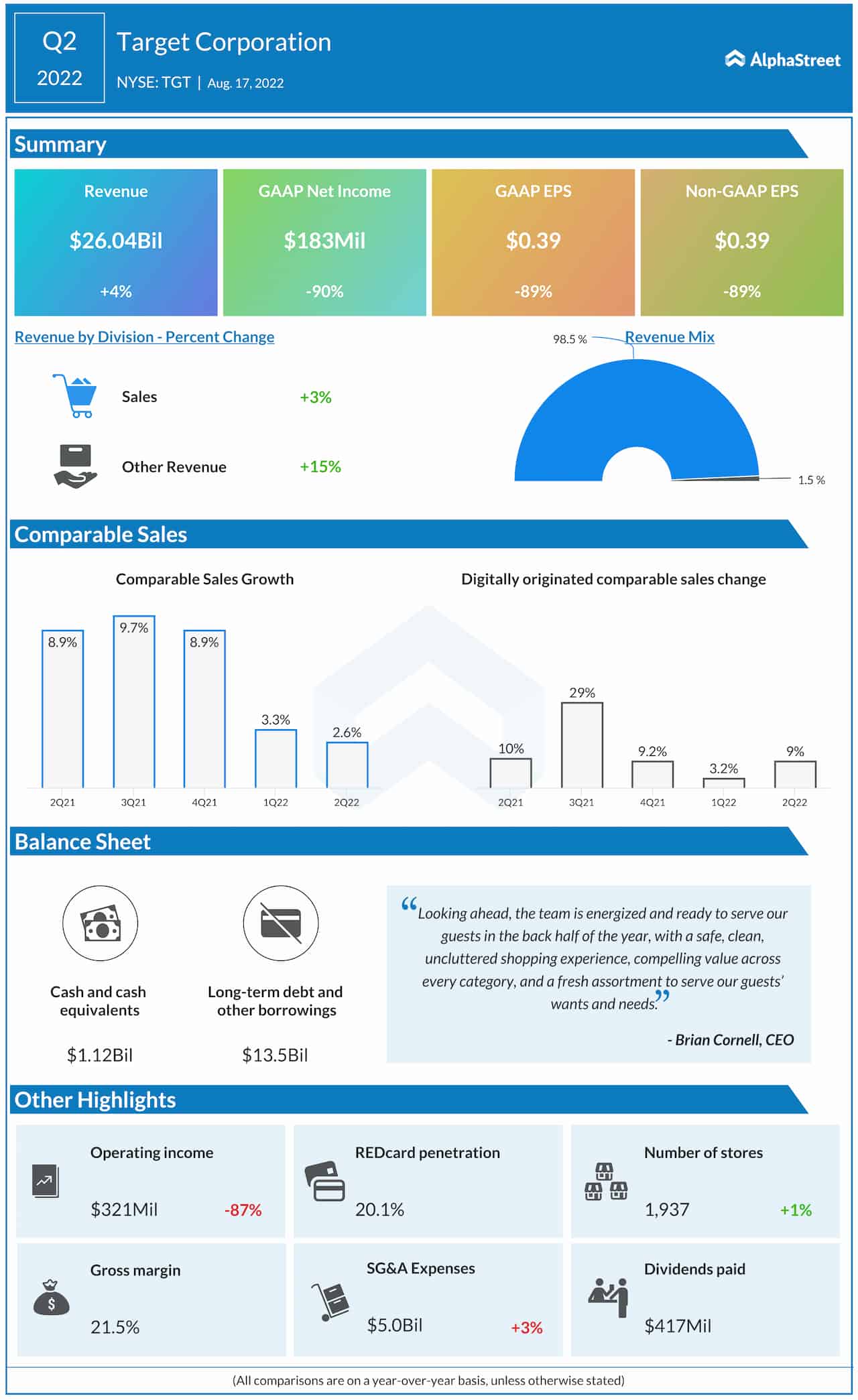 Target will be reporting third-quarter results on November 16 before the market opens. It is widely expected that adjusted earnings would drop to $2.12 per share on revenues of $26.38 billion. The company’s bottom line missed estimates for two consecutive quarters, after beating consistently in the trailing periods. In the second quarter, adjusted earnings declined sharply to $0.39 per share, despite a 4% increase in revenues to $26 billion. Same-store sales growth decelerated to 2.6%, continuing the recent trend.

“As we formed and revisited our plans for the third quarter and beyond, we spent a lot of time listening to the wants, needs, hopes, and concerns of our guests. What we’re seeing in our results and hearing from our guests is that they still have spending power, but they’re increasingly feeling the impact of inflation. And while the recent reduction in prices at the gas pump have been encouraging, guest confidence in their personal finances continues to wane.”

Macro challenges and the impact of inflation on consumer confidence would be a drag on Target’s finances in the near future. Considering the ongoing shift in shopping behavior, marked by widespread adoption of eCommerce and cutbacks on in-store purchases, the company should keep ramping up digital channels to keep pace with its eCommerce-focused peers.

TGT traded higher early Wednesday after closing the previous session up 1%. It has mostly traded sideways in the past six months and lost about 29% since the beginning of 2022.