Denim jeans maker Levi Strauss (NYSE: LEVI) reported third quarter 2019 financial results that surpassed the market’s estimates. In its second earnings report after becoming public in March 2019, Levi Strauss posted adjusted earnings of $0.31 per share on revenue of $1.45 billion. Analysts had projected the company to earn $0.28 per share on revenue of $1.44 billion.

The San Francisco, California-based company reaffirmed its fiscal year 2019 outlook. LEVI stock, which ended down 1.92% today at $19.39, was up about 1% in the after-market session immediately after the earnings announcement. 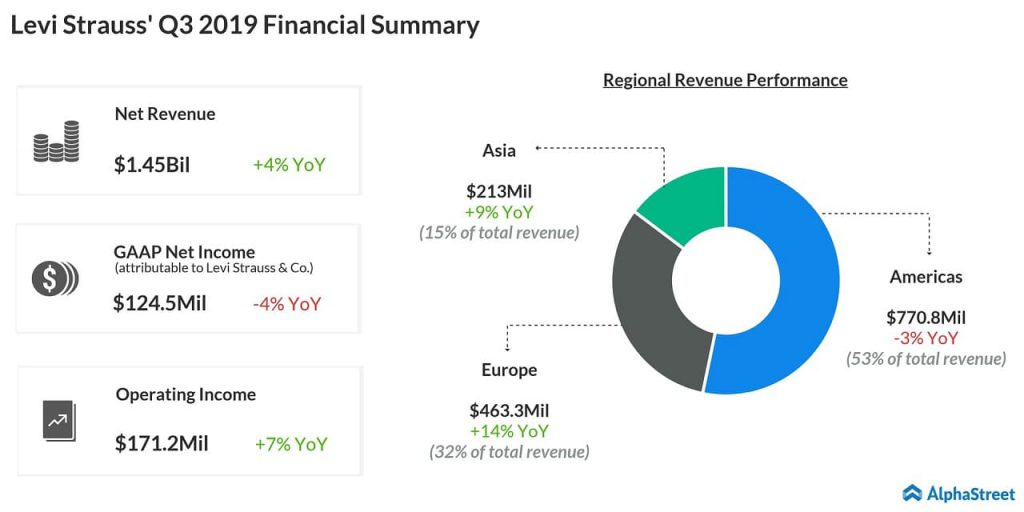 GAAP profit per share declined 3% year-over-year to $0.30, while revenue grew 4% on a reported basis and 5% on a constant currency basis.

“As for the fourth quarter, we again expect strong performance in international, direct-to-consumer, women’s and tops, and improved comparisons for U.S. wholesale,” said CEO Chip Bergh.

For the fiscal year 2019, Levi Strauss maintained its outlook. The company expects constant-currency revenue growth to be 5.5% to 6.0%. Capital expenditure for the full fiscal year is estimated to be between $190 million and $200 million. Levi Strauss expects to open nearly 100 new company-operated stores in 2019.

Revenue in the Americas region fell 3% both on a reported basis and constant-currency basis due to a drop in the wholesale business. Europe and Asia regions had a reported revenue growth of 14% and 9%, respectively, benefitting from strong performance from direct-to-consumer and wholesale channels in the regions.