The company said its revenues for the third quarter rose 2.6% to $316.9 million, ahead of analysts’ estimate of $315 million, driven by the strength of its products. 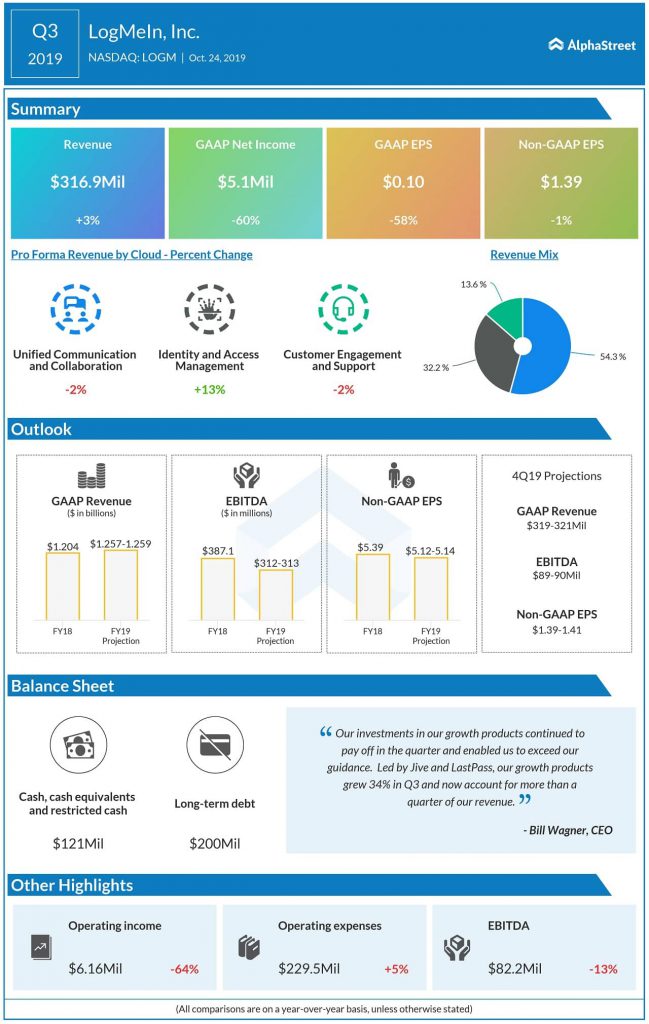 Meanwhile, adjusted EPS fell by a cent year-over-year to $1.39, even the street was expecting $1.36.

CEO Bill Wagner said in a statement, “Our investments in our growth products continued to pay off in the quarter and enabled us to exceed our guidance.  Led by Jive and LastPass, our growth products grew 34% in Q3 and now account for more than a quarter of our revenue.”

The Boston-based firm, which provides products that allow access to remote systems, said its CFO Ed Herdiech will step down some time next year. Herdiech has been with the LogMeIn for 13 years and was integral to its IPO in 2009.

For the fourth quarter, the company currently expects revenues in the range of $319 million to $321 million, while adjusted net income is estimated in the range of $1.39 to $1.41 per diluted share.

LOGM shares have declined 17% since the beginning of this year.

Also Read:  Why Autodesk (ADSK) stock is a wise bet despite the high valuation

After Novavax (NASDAQ: NVAX) reported its progress on developing the COVID-19 vaccine at the end of February, the shares of the company started trading in double-digits after a long time.

Cannabis was recognized as an essential business in several markets when the shutdown came into effect, including Canada and some US states, at a time when its legalization is getting

Eastman Kodak (NYSE: KODK) reported a loss of $5 million on revenue of $213 million in the second quarter of 2020. The company earned $201 million in the prior-year quarter.