Revenues of semiconductor firm Microchip Technology (MCHP) rose sharply in the first quarter aided by strong demand for its flagship microcontroller products, lifting the company’s earnings above analysts’ estimates. Meanwhile, the stock fell more than 4% in the extended session, after the company announced below-consensus guidance for the second quarter.

At $1.22 billion, net sales were up 25% compared to the first quarter of 2018 and in line analysts’ prediction. Driving the top-line growth, microcontroller sales advanced 14% and analog sales jumped 39%, with contributions from the recently acquired Microsemi business.

“Since our acquisition of Microsemi Corporation on May 29, 2018, we have been actively engaged in further understanding the opportunities and challenges of this business. While we have lots of work to do to achieve our long-term financial targets, we have high confidence in our team’s ability to achieve these results over time “, said Microchip CEO Steve Sanghi.

The stock fell more than 4%, after the company announced below-consensus guidance for the second quarter

Looking ahead, the management expects adjusted earnings to be between $1.65 per share and $1.83 per share for the September quarter. Second-quarter sales are forecast to be in the range of $1.474 billion to $1.550 billion, and gross margin in the 61.3-61.9% range.

Separately, the Chandler, Arizona-based company said its board of directors declared a quarterly cash dividend of 36.40 cents per share, to be paid on September 4, 2018, to stockholders of record on August 21, 2018.

Among the other chipmakers, Intel (INTC) last month reported a marked increase in second-quarter profit as its data-centric business pushed up revenues by about 15%. AMD (AMD) posted above-consensus earnings for its most recent quarter on broad-based revenue growth.

Microchip shares hit a record high in early June, but pared most of the gains in the following weeks. The stock traded higher throughout Thursday’s regular session, but dropped sharply in the afterhours. 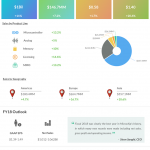