Millennials often get a bad rap when it comes to investing in the stock market. However, several surveys conducted on this selfie-obsessed generation reveals, not just that they are astute investors, but also that they prefer investing in companies or brands they have grown up with. They prefer companies that provide products or services that they love.

Which is why, we believe tech stocks, primarily FANG stocks (Facebook, Amazon, Netflix, and Google -now Alphabet, Inc.) will remain desirable as long as they continue to please youngsters. 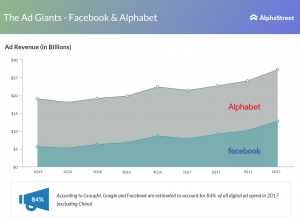 The owner of Instagram and a proponent of virtual reality, Facebook is one such platform that has millions of young adults (the growing investors) as its active users. What was earlier a leisurely trend, has now converted itself into a source of news and information. The spike in active users and the amount of time spent on the site shows it is unlikely that the young users will ditch Facebook, unless they are lured by a breakthrough alternative.

However, a wealthy and hawk-eyed Facebook is ever willing acquire any such potential competitors, and bring them under its wings.

In the latest quarterly results, the company reported having an average of 1.40 billion active daily users, a growth of 14% from the prior year period. A steady growth in the user base means more opportunities for the company to generate ads. The revenue generated from its mobile ads represented almost 89% of the ad revenue compared to 84% in the prior year period. It is no longer news that the social networking king dominates the digital ad market.

In the latest quarterly results, the company reported having an average of 1.40 billion active daily users, a growth of 14% from the prior year period.

A latest survey by a New York-based investment firm Cowen claims that Facebook will emerge as a digital ad leader ending Google’s dominance, mostly due to the growing popularity of video ads and Instagram. Despite its massive size, the company has managed to keep upping its ad revenue, in turn driving the company’s revenue. 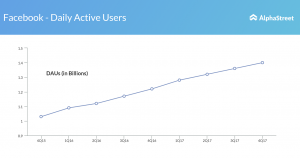 Zuckerberg’s mark in AI and VR

Mark Zuckerberg and his team have always shown their interest in experimenting with risks. Their foray into VR and AI says it all. The company is already working towards integrating virtual reality into its users’ experience. The company bets its future on these technologies.