Office Depot (ODP), a leading provider of office supplies, reported an 80% dip in earnings for the first quarter of 2019 due to poor performance at its CompuCom division. The bottom line came in line with the analysts’ expectations while the top line exceeded consensus estimates. The company lowered its sales and operating income guidance for the full year 2019.

Net sales declined by 2% to $2.77 billion. The decrease in sales was the result of lower sales in its CompuCom and Retail divisions. Product sales dropped 2.6%, while service revenues inched up 0.3% driven by a 13% and 16% year-over-year increase in service revenue in its Business Solutions and Retail division, respectively, effectively offset by lower service-related revenue at its CompuCom division. 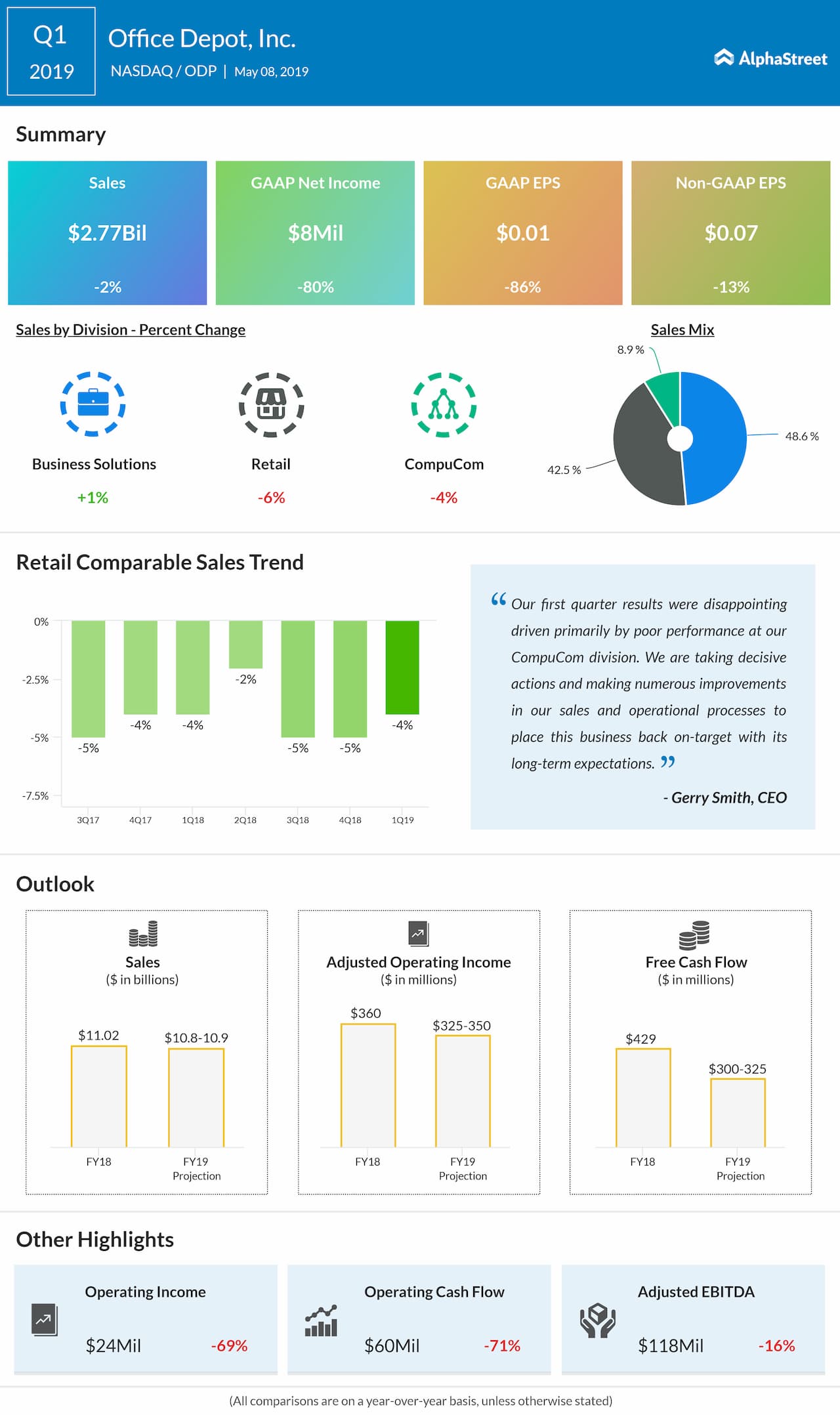 The company expects profitability to improve at CompuCom over the course of the year as a result of the actions already underway. These actions, coupled with the expected benefits from its Business Acceleration Program, are expected to have a positive impact on its profitability in 2019 and beyond.

For the first quarter, sales from the Business Solutions division rose by 1% year-over-year. This reflected the impact of acquisitions, without which sales were down 2% versus the prior year. Organic sales performance was primarily driven by continued growth in adjacency categories and services more than offset by declines in the more traditional office product categories.

Sales from the Retail division fell by 6% from the prior year period. The division was hurt by the planned closures of underperforming stores as there were 17 fewer retail outlets at the end of the first quarter of 2019 as compared to the prior year. Comparable store sales were down by 4% driven by lower store traffic, partially offset by higher conversion rates and a 16% growth year-over-year in buy online, pick up in-store sales.

Sales from CompuCom division declined by 4% due in part to lower project-related revenue within existing accounts, whereby some projects were delayed, reduced in scope or failed to materialize as expected.

Shares of Office Depot ended Tuesday’s regular session down 5.08% at $2.24 on the Nasdaq. The stock has fallen over 1% in the past year and over 28% in the past three months.