Shares of software giant Oracle Corp. (ORCL) fell sharply today after the company’s third quarter results and the outlook for the cloud business, which failed to match Street expectations. The unimpressive results hastened the stock’s retreat from the record highs it reached earlier this month.

Apparently, investors were not amused by the 20% growth the company registered in its pre-tax earnings to $0.83 per share, which also exceeded market expectations. Also, the weak outlook gave rise to apprehensions that Oracle’s transition into a cloud company might be losing momentum.

The market reaction assumes significance considering the company’s fast-paced transformation into a cloud subscription company from a provider of software licensing. It is widely perceived that Oracle’s changing business model puts it in a uniquely advantageous position to penetrate the cloud market. 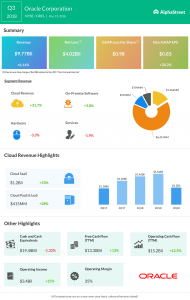 Earlier, Adobe (ADBE) and Salesforce (CRM), the other major players in the cloud space, reported better than expected growth in their cloud business in the most recent quarter.

Oracle’s revenue rose 6% year-over-year to $9.8 billion during the third quarter, a tad lower than analysts’ forecast. The softness in revenue is partly attributable to slower growth in the Software-as-a-Service (SaaS) business, which the company claims to be in its nascent stage.

However, the enterprise software company exuded confidence that its Cloud SaaS applications business would maintain its growth momentum and hit the $5-billion target soon.

The Cloud-based services business registered a 32% growth during the quarter, broadly matching expectations, but it was nowhere near the second quarter’s 44% surge.

For the fourth quarter, the database software company is looking for a 19-23% increase in the cloud business, much lower than Wall Street analysts’ estimate.