What to expect from Overstock.com Q2 earnings?

Overstock.com (NASDAQ: OSTK) share has been on a roller coaster ride in the past 12 months. The stock reached a 52-week high level of $48 last August and has been on a free fall touching a new 52-week low of $9 mark in June 2019. However, the company’s stock has recovered sharply surging 133% from June to today’s price of $21.6.

Check out the full earnings coverage of Overstock.

The increase was backed by a new partnership deal inked by the Overstock’s subsidiary tZERO with a movie production house for implementing blockchain technology. The stock price has seen a stellar growth of 62% in 2019. Amidst this backdrop, the company is slated to report its second quarter results tomorrow after the bell.

Analysts are expecting Overstock to report sales of $376 million and loss of 92 cents per share. It’s worth noting that the company failed to beat earnings estimates in the past six quarters. Investors would be interested in seeing the retailer reversing the trend in the second quarter. 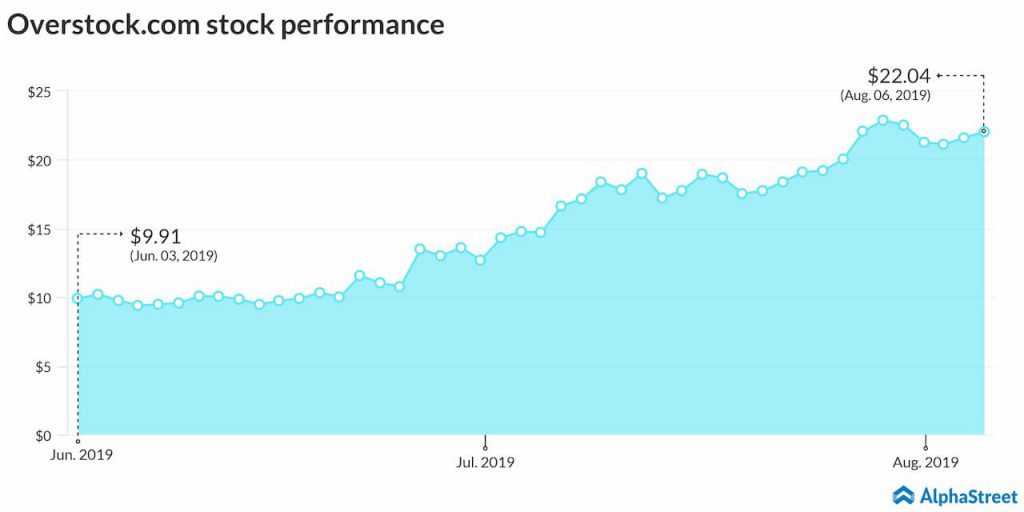 Last quarter, retail sales brought in 98.6% to the top line and this trend is expected to continue in the second quarter as well. Last August, Overstock pruned its marketing spending to focus on reducing expenses which would help it return to profitability. Due to reduction in operating expenses, loss per share contracted 56 cents to $1.18 per share.

Gross margins contracted 1.2% in the first quarter due to increased shipping costs and reduced promotional activities impacted margins. Free cash flow came in at a negative $55.6 million due to reduction in operating cash flow. Analysts would be closely watching how these metrics are going to trend in the second quarter.

Last month, tZERO inked a deal with move production house Vision Tree for its upcoming movie Atari: Fistful of Quarters. As part of the deal, tZERO will develop Bushnell tokens and the production firm plans to raise $40 million by selling tokens to investors. Apart from getting a cut from the movie’s earnings, the owners would be able to vote on the trailer and can play an active role in selecting the cast for the movie.

The deal has been received well by shareholders with the stock price surging above 15% post the announcement of the deal. Investors would be hoping that tZERO would be able to use this as a springboard in making a foray into the Hollywood which would increase monetization opportunities in the long-term which would be accretive to earnings.

Talking about the potential of the partnership, tZERO CEO Saum Noursalehi said, “Our goal is to apply blockchain technology to capital markets and every industry that can benefit from the platform we have built. The Atari movie is the perfect project to lead the way for the tokenization of the movie business.”

Analysts would be expecting more insights from the management tomorrow on how the deal is going to contribute to the earnings and how it’s going to shape up in the near future.