Higher expenses and muted sales weighed down on the third-quarter earnings of pizza chain Papa John’s (PZZA), which is struggling to come out of the embarrassment caused by the unceremonious exits of John Schnatter as CEO earlier this year. The company’s stock dropped Tuesday after its earnings and revenues declined and missed Wall Street estimates. 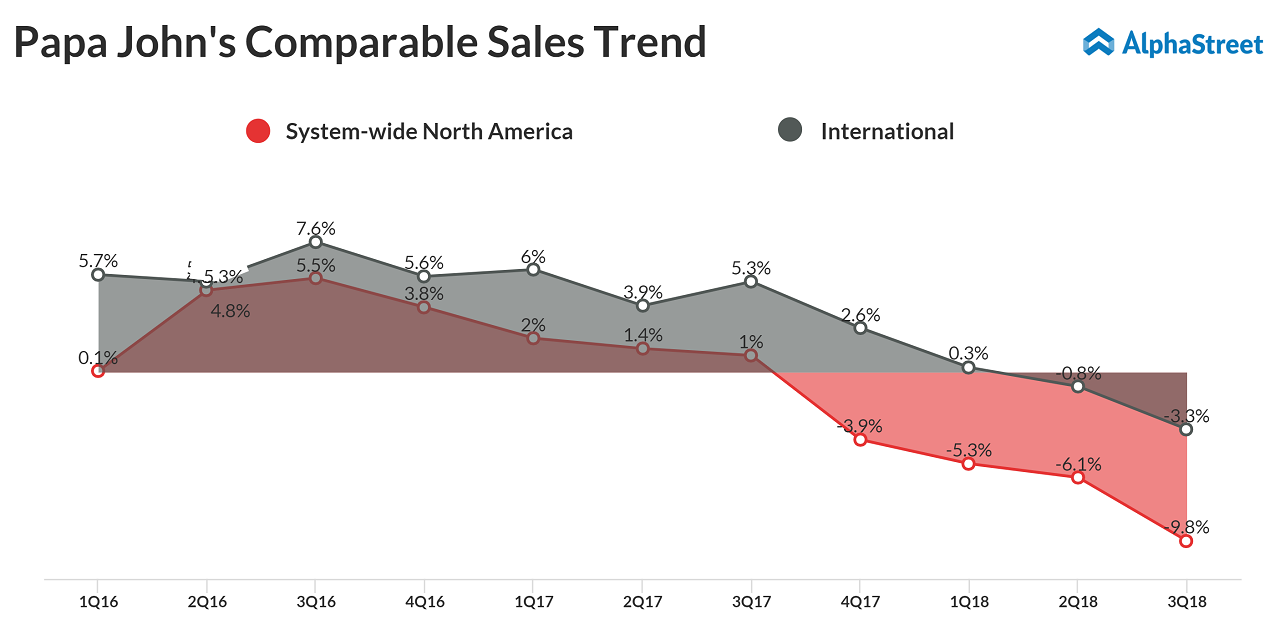 Revenues declined 16% to $364 million during the three-month period and fell short of expectations. All the business segments witnessed a slump in sales, with domestic company-owned restaurant sales registering the biggest fall. System-wide North America comparable sales and international same-store sales dipped 9.8% and 3.3% respectively. Analysts had forecast a steeper decline.

“During the quarter, we took important actions resulting in improved consumer sentiment and North America comp sales that were slightly ahead of expectations. While the operating environment remains challenging, these early indicators combined with our strong cash flow give us confidence in the consumer initiatives underway across the Company,” said CEO Steve Ritchie.

The company said it currently expects North America comparable sales to decline in the 6.5-8.5% range in fiscal 2018, which represents an improvement from the 7-10% fall it predicted earlier. The guidance for full-year earnings has been narrowed to the range of $1.30 per share to $1.60 per share from the previous outlook of $1.30-$1.80 per share.

There is speculation that Papa John’s might go up for sale in the wake of the recent controversy surrounding its former CEO, which created a split among the franchises and dragged down the company’s sales amidst faltering store footfall.

During the third quarter, the management completed refranchising of 31 company-owned restaurants in Minnesota. Over the past twelve months, Papa John’s shares dropped about 10%. The stock closed Tuesday’s trading lower and lost further in the extended session.