It’s been just a month since John Schnatter, founder of Papa John’s (PZZA) was ousted from the company due to the alleged racist comments made by him during a conference call in May. Since the news broke out in July, it’s been in the news for all the wrong reasons with its stock plunging 17%.

Amidst challenging times, Papa John’s announced its second-quarter results, which failed to meet street estimates. On top of that due to the downward revision of 2018 earnings outlook, the pizza chain’s stock took a severe beating plunging more than 10%, touching its new 52-week low in the extended hours of trading.

Revenue decreased 6.2% to $408 million, while earnings plunged 24.6% to $0.49 per share. The disappointing results are primarily due to dwindling comp-store sales, which has been on the downhill for more than a year.

On the same-store sales front, the North American region reported a 6.1% drop in sales, which was worse than the 4.9% drop expected by the street. International sales saw a decrease of 0.8% compared to 3.9% increase witnessed last year. The drop in sales has been a concern for investors and it’s high time for Papa John’s to reverse the trend, which is going to be a daunting task. 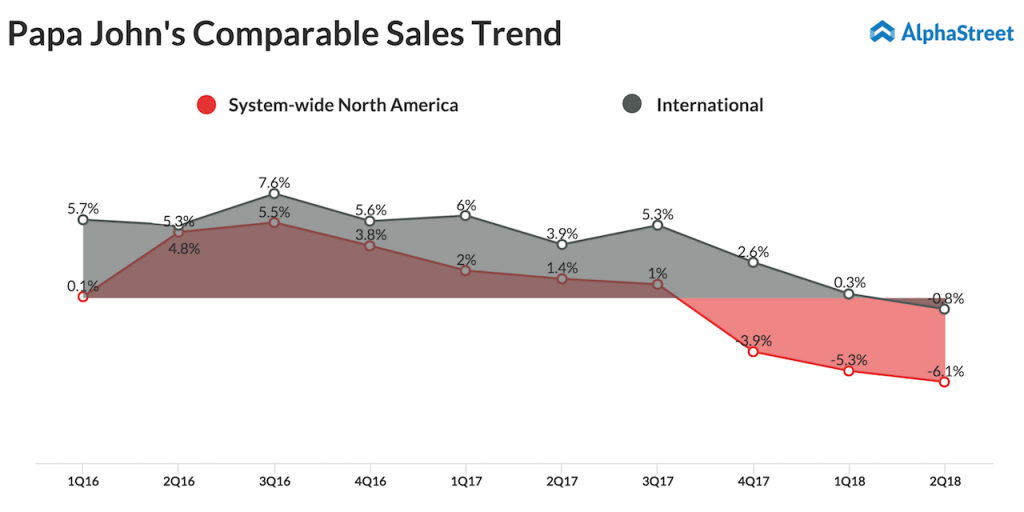 In July, as Forbes unveiled the news about the racial comments made by Schnatter costing him to exit from the Chairman role, the board also put additional restrictions on the founder on talking to media and took off his photo from all marketing materials.

Schnatter last week sued Papa John’s to provide him the official documents relating to his ouster from the company. It’s worth noting Schnatter still is part of the board and is the largest shareholder with nearly 30% stake of the company. The pizza chain has replied that it would provide all the records requested by Schnatter and dubbed the lawsuit filed by him as “needless and wasteful” rejecting his allegations.

Related: A rather ungracious exit for Papa John’s founder

As the ongoing battle continues with its founder along with sales slump, Papa John’s has revised downwards its outlook for 2018. Earnings is now expected to come in the range of $1.30 to $1.80 per share compared to the previous outlook of $2.40 to $2.60 per share. North American comp-store sales is forecasted now between negative 7% to 10% and international comp-store sales is projected to come in the range of negative 2% and 1%.