PepsiCo Inc. (PEP) reported a 2.4% increase in revenue to $16 billion for the second quarter of 2018. Organic revenue grew 2.6% during the quarter. Net income attributable to PepsiCo dropped 14% to $1.8 billion, while diluted EPS fell 13% to $1.28 compared to the prior-year period. Core EPS grew 8% to $1.61. The company’s results beat analyst expectations.

PepsiCo, which acquired Bare Foods earlier this year, saw good growth in its Frito-Lay business. The company however faces stiff competition, particularly from top rival Coca-Cola (KO). The food and beverages business in the US is seeing pressure from high costs and shifting consumer trends and PepsiCo’s beverages segment is facing heat in particular, with increasing competition from smaller rivals. PepsiCo has plans to invest more in its proprietary cola business to drive sales.

For full-year 2018, PepsiCo expects organic revenue growth of at least 2.3%. Core earnings are expected to increase 9% from last year to $5.70. The company expects to return around $7 billion to shareholders through share repurchases of around $2 billion and dividends of around $5 billion.

Related: PepsiCo needs to seal the leak in beverage segment 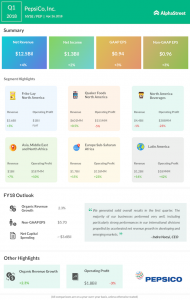