A low-cost ticket is probably an indication that the flight might come with a few bumps. However a recent report suggests that people might still prefer to travel at a lower price despite their gripes. Airline Weekly’s annual Global Earnings Scorecard for 2018 shows that low-cost carriers such as Allegiant Air (ALGT), Frontier Airlines and Spirit Airlines (SAVE) have no trouble generating business despite any complaints that might come their way. 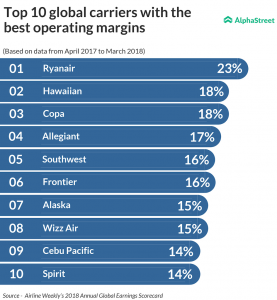 The report, which focused on data from April 2017 to March 2018, ranked the airlines based on their operating margins, the most common metric for the comparison of airlines by size and type. The three aforementioned carriers were among the top 10 global airlines with the highest operating margins.

American Airlines is going through a rough patch with a computer glitch resulting in thousands of flight cancellations at its subsidiary PSA Airlines. The carrier is still recovering and is expected to achieve normalcy in a couple of days. The airline also announced several job cuts at the management level to increase efficiency. American’s shares are down close to 17% so far this year.

Alaska Air Group reported a 7.4% year-over-year increase in traffic for the month of May while total capacity rose 9%. The stock has fallen around 15% year-to-date, but has gained around 8% in the past one month. Delta Air Lines shares are down over 2% while Southwest’s stock has dropped around 21% so far this year. United Airlines, however, has gained around 15% over the past six months.

Meanwhile, amidst the rising fuel costs, airline companies are attempting several measures to cut costs and one of this is to reduce the overall weight on the plane. From redesigning bathrooms to cutting the weight of the seats, cargo containers and even beverage carts, carriers are looking at all possible options to trim flab. All these efforts have helped airline companies save millions of dollars. It appears that irrespective of whether seats get bigger or smaller, as long as the prices stay low, the passengers are fine.