Net loss from continuing operations were $255.6 million or $0.24 per share, narrower than the previous year quarter’s loss of $483.7 million or $0.46 per share. The latest quarter results included income tax expense related to an increase in the valuation allowance against the company’s deferred tax assets.

Adjusted loss from continuing operations was $13.3 million or $0.01 per share, narrower than the market expectations. This compares to a net loss of $7.8 million or $0.01 per share last year. Revenues inched down 0.2% to $5.38 billion. Retail Pharmacy Segment revenues were flat compared to the prior year period at $3.97 billion, while revenue in the Pharmacy Services Segment rose 1.2% to $1.46 billion on an increase in Medicare Part D membership. 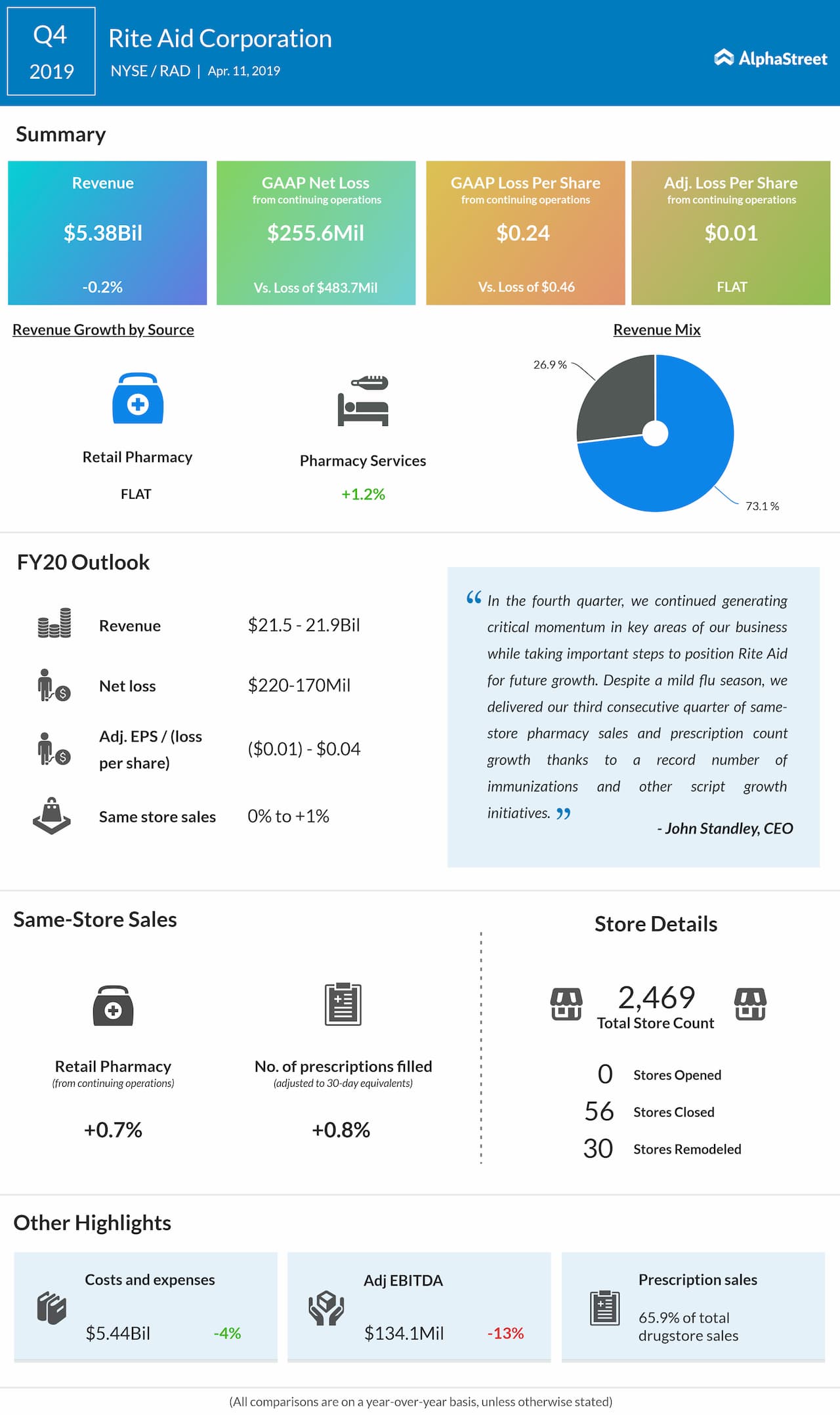 For the fourth quarter, same-store sales from Retail Pharmacy inched up 0.7% over the prior year, consisting of a 2.1% increase in pharmacy sales and a 1.9% decrease in front-end sales. Pharmacy sales were negatively impacted by about 100 basis points as a result of new generic introductions.

The number of prescriptions filled in same stores, adjusted to 30-day equivalents, increased 0.8% over the prior year period as the company’s initiatives to drive script growth more than offset the benefit of last year’s strong flu season. Prescription sales from continuing operations accounted for 65.9% of total drugstore sales.

As previously announced on March 21, Rite Aid’s stockholders approved a reverse stock split of its outstanding shares of common stock to avoid delisting. On April 10, 2019, the board approved the implementation of the reverse stock split at a ratio of 1-for-20. Once effective, the split will cut the number of common shares issued and outstanding from about 1.08 billion to about 54 million. Rite Aid’s common stock will begin trading on a split-adjusted basis on the New York Stock Exchange on April 22, 2019.

On March 13, Rite Aid stock recovered slightly after the decision to lay-off 400 employees and the exit of top executives including CEO John Standley, CFO Darren Karst, and COO Kermit Crawford. The company has been trading on the NYSE under $1 for quite a long time.

Investors believed the shake-up of the top management, layoff, and reverse stock split will bring the stock above the $1 ground-level. Majority of the analysts had recommended a “hold” rating on the stock with a price target of $0.67 per share. Meanwhile, traders expect the stock to reach above $20 after the reverse stock split is completed.

Shares of Rite Aid ended Wednesday’s regular session up 1.38% at $0.57 on the NYSE. Following the earnings release, the stock inched down over 1% in the premarket session.