Shopify swings to a surprise profit in Q2 on strong revenues

E-commerce technology company Shopify (SHOP) made a modest recovery in the second quarter after staying in the negative territory for a long time. The improvement, which defied analysts’ forecast for a loss, was driven by a sharp increase in revenues. However, the company’s stock plunged more than 6% in early trading Tuesday as investor sentiment over its overall performance remains downbeat.

The bottom-line benefitted from a 62% year-on-year increase in revenues to $245 million, which far exceeded estimates. Revenues of the Subscription Solutions segment increased 55%, while merchant solutions revenue jumped 68%

“We built the Shopify platform to meet the many and varied needs of all types of merchants, whether they are makers or curators, entrepreneurs or household brands. This presents us with an expansive opportunity set that we will continue to invest in with a view to even greater success over the long term,” said CFO Amy Shapero.

Shopify has managed to scale up business since it went public a few years ago, taking advantage of the prospects of the sector it serves. The company has been expanding market share consistently, supported mainly by its innovative and diverse product portfolio.

For fiscal 2018, the expectation is for adjusted operating profit in the range of flat to $5 million. On an unadjusted basis, the company is looking for operating loss between $105 million and $110 million. Full-year revenues are estimated to be between $1.015 billion and $1.025 billion.

Shopify’s shares gained over 500% since they were listed on the New York Stock Exchange in 2015, all along maintaining upward momentum. The stock closed the last trading session down 7% and continued the downtrend in premarket trading Tuesday. 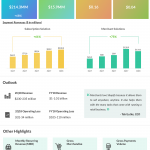