Take-Two Interactive (TTWO) deserves a place in your portfolio. Here’s why

Gaming services have been in high demand since virus-related restrictions came a couple of years ago, and the trend is continuing despite the relaxation of curbs. However, there is speculation that demand conditions would go back to pre-pandemic levels once normalcy returns to the market.

Take-Two Interactive Software, Inc.  (NASDAQ: TTWO) has an impressive track record of publishing hit video games that keep players engaged, such as the Grand Theft Auto and NBA 2K series.  The company’s stock entered 2022 on a positive note but soon lost momentum and slipped to a four-month low, before recouping most of the losses in the following weeks. The current valuation looks right from the investment perceptive.

Experts’ bullish outlook points to sharp gains in the remainder of the year, and the stock is expected to breach the $200-mark. The robust demand for gaming services and Take-Two’s growth initiatives such as the planned acquisition of Zynga gives it an edge, which should translate into consistent shareholder returns. TTWO is unlikely to disappoint investors as it has what it takes to enhance their portfolios.

The company managed to come out of the initial slowdown that followed the coronavirus outbreak pretty quickly and delivered stable performance since then. The quarterly results mostly exceeded the market’s prediction. For the third quarter of 2022, it reported mixed results – earnings decreased by 21% to $1.24 per share but beat the estimates, while net bookings fell short of expectations despite increasing to $866.1 million. At $903.3 million, revenues were up 5% year-over-year. 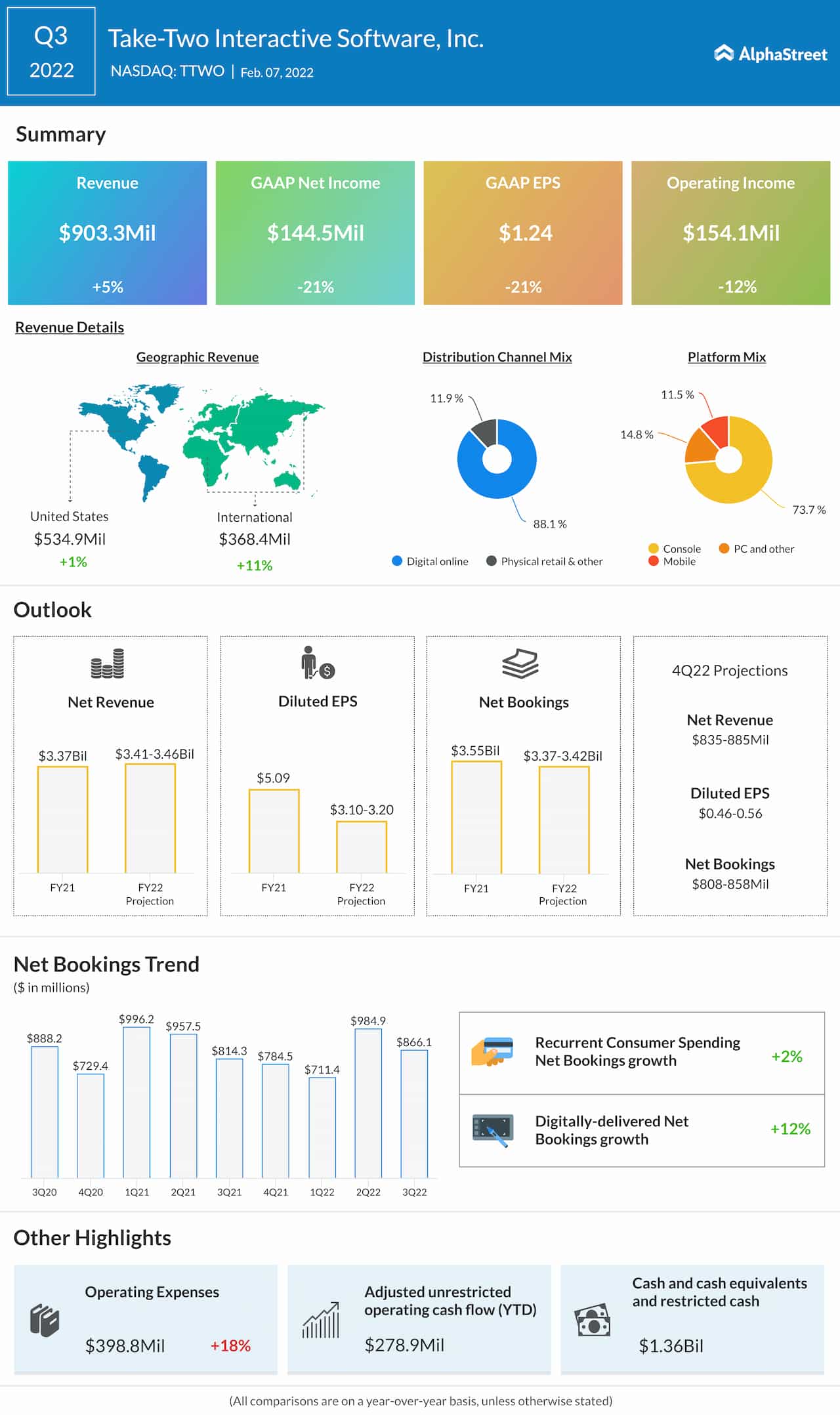 “We have the strongest and most diverse pipeline in our Company’s history comprised of new intellectual properties, as well as sequels to many of our beloved franchises. We look forward to delivering many of these titles in the coming months and beyond. We’re also confident that we can emerge as an even stronger player within our industry and deliver long-term value for our shareholders following the anticipated closing of our transaction with Zynga. With greater scale, extensive synergies, and a more diversified portfolio of industry-leading titles, we believe that together our two companies will far exceed our individual goals.”

In a move that is expected to give it a major boost, Take-Two last month announced the acquisition of San Francisco-based social gaming service Zynga, Inc. (NASDAQ: ZNGA), maker of the popular FarmVille franchise, for about $13 billion. It is estimated that post-buyout, Take-Two would become one of the largest and most diversified mobile game publishers. The deal will boost revenues in the coming quarters, but the related costs and Zynga’s losses would be a drag on the bottom line initially.

In a similar deal, Microsoft Corp. (NASDAQ: MSFT) recently inked a deal to buy game publisher Activision Blizzard (NASDAQ: ATVI) for a whopping $69 billion. The tech titan’s enhanced gaming portfolio, now powered by Activision, can pose a threat to others in the market.

Over the past twelve months, shares of Take-Two lost around 13%. The stock closed Tuesday’s session down 2%, after trading lower throughout the day.