And just like that, Tesla is back in the news. And this time, it is actually regarding a product — the Model 3 sedan to be exact. Eccentric showman and Tesla CEO Elon Musk on Monday admitted to a braking issue on Tesla Inc’s electric car, in line with a finding by Consumer Reports. However, he did add that the bug can be fixed using a firmware update that would be rolled out soon.

Over the past weekend, Musk unveiled the specs of the dual-motor, all-wheel-drive Model 3 over the weekend — including a top-of-the-line variant more expensive than the base Model S and Model X.

Looks like this can be fixed with a firmware update. Will be rolling that out in a few days. With further refinement, we can improve braking distance beyond initial specs. Tesla won’t stop until Model 3 has better braking than any remotely comparable car.

US magazine Consumer Reports said it would not recommend the Model 3 — though affordable — since it was seen to brake slower than an average full-sized pickup truck. Musk retorted with a tweet late on Monday, “with further refinement, we can improve braking distance beyond initial specs. Tesla won’t stop until Model 3 has better braking than any remotely comparable car.” 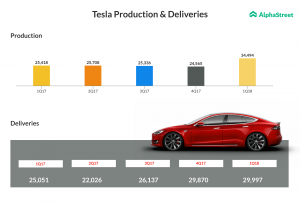 As it was clear from Tesla’s earnings last quarter, the electric car maker is losing money on every shipment of Model 3, despite a 25% margin target on each car. So it makes perfect sense that Tesla is rolling out the most affordable version of the car.

The $35,000 Model 3 seems to be a driver for more bookings on the higher models, where Tesla can really make some money. Let’s hope that is what Musk has in mind, or as many industry analysts say, Tesla might have to raise billions by 2020 to be in line with the CEO’s ambitious plans.