After the company reported its production and delivery numbers on Monday, shares of Tesla (TSLA) have nosedived in the past two days. On Monday, the stock dropped more than 2% from last week’s closing price and today it plummeted 7% and continued to trade in red after the bell. The quality concerns of Model 3 vehicles and a few analysts’ ratings shattered the stock price in the two days. Thanks to an early closing today, or the stock might have tanked further.

Almost a month ago, the day after Tesla’s annual shareholder meeting, investors showed confidence in the company and the shares jumped 10% and the stock price crossed the $300 mark. On Monday, the automaker reported production and delivery numbers for the second quarter. Tesla had delivered 40,740 vehicles, an increase of 85% compared to a year ago and in line with the outlook provided on May 3. The company reiterated its overall target of 100,000 Model S and Model X deliveries in 2018.

In Q2, the total production more than doubled year-over-year to 53,339 vehicles in which Model 3 (28,578) accounted for more than 50% of the vehicles produced. Despite the headwinds such as weaker US dollars and the trade war tensions between the US and China, the company reiterated its positive GAAP net income and cash flow outlook in Q3 and Q4. Tesla also added that it had achieved the production target of 5K Model 3s/week. 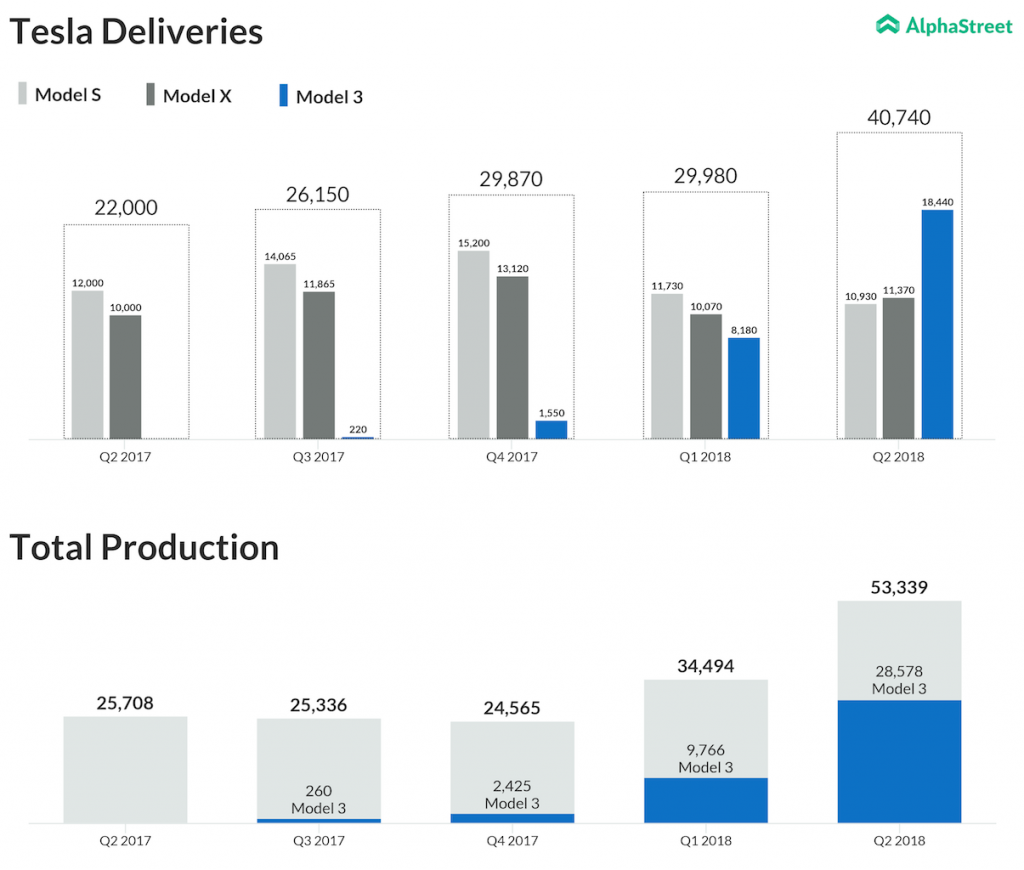 Business Insider reported that Tesla chief Elon Musk has asked his employees not to carry over the brake and roll test for Model 3 vehicles, which is an important quality test conducted in the final stages of production, to boost up the Model 3 production rate. However, Tesla denied this by saying that each Model 3 car undergoes rigorous quality checks, including brake tests. Business Insider also added that Tesla was originally slated to hit 36,020 Model 3s for the second quarter.

It’s also worth noting that Tesla confirmed on Monday that its chief engineer Doug Field who was taking care of the vehicle engineering has left the company. In May, Tesla said that the former Apple (AAPL) executive is taking long leave to spend time with his family. With CIO Gary Clark’s exit in the last week and CAO Eric Branderiz’s exit in March, the company doesn’t have any senior executives apart from Musk, CTO JB Straubel and Chief People Officer Gabrielle Toledano. With these recent developments, auto industry experts have raised concerns over Model 3’s quality and safety.

Adding to the woes, a few analyst firms have downgraded the troubled company after its production report. JP Morgan has maintained its rating of “Underperform” and CFRA analyst Efraim Levy degraded his rating to “Sell” from “Hold”. If the stock doesn’t bounce back in this week’s two remaining trading days, it might once again go below the $300 mark. Shares of Tesla have inched down 0.2% year-to-date and dropped 12% in the past one year.