The banking industry is now too big to fail!

While the country is staunchly debating the policies of the Trump administration, executives of all major banks remain a happy lot. And why not? The president himself had handed over to them the best New Year gift they could ask for – The Tax Cuts and Jobs Act of 2017.

The immediate impact of the Republican tax reform, though negative, was visible as the banks reported their fourth quarter earnings in January. Most major banks including JPMorgan Chase and Bank of America reported steep declines in earnings, driven by colossal one-time charges related to the tax reform. Citigroup and Goldman Sachs reported their first quarterly losses since 2009 and 2011 respectively.

Despite the free fall in bottom-line figures, stocks continued their rally, since the charges were already projected by the bank executives.  The prospects of better earnings and capital returns spurred by lower taxes in the future added fillip to the rally.

The $1.5 trillion tax overhaul is meant to bring back corporate earnings accumulated in foreign countries, and in turn, improve capital expenditure in the US, employment and benefits to workers. The law is expected to aid all the industries, but being among the highest taxpaying categories in corporate America, the banking sector will probably be the best beneficiary of all.

Now let’s delve a bit deeper into the law and analyse its charges and benefits. As you may already know by now, the tax reform revolves around reducing corporate rate from approx. 35% to around 20%, which is better than average worldwide rate of 22.5%. Some of the bigger financial institutions expect the rate to be even below 20%. This cut down helps banks post higher after-tax profits, besides allowing them better liquidity. 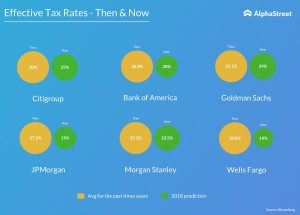 All is well except for one catch.  The law forces companies to pay some hefty one-time charges, which is the entire hullabaloo you heard throughout the earnings period.

The charges are of two types, and to understand the first one, you will need to travel back in time to 2008. The financial crisis.

All major US banks had heavily invested in toxic assets and bad mortgages, and before anyone had a clue, the giants were on the verge a collapse. However, taking advantage of a US law, the banks later converted their massive losses from the failed assets into credits, which would in turn help reduce their future tax bills.

The charges are of two types, and to understand the first one, you will need to travel back in time to 2008 – The financial crisis.

Coming back to the present, when the government cut down the corporate rate, the banks had to adjust their deferred tax assets to the new rate. Citi, being the biggest bank at the time of the crisis, had accumulated the highest amount of such assets. This explains why the tax-related charges incurred by the bank in 4Q17 were much higher than its counterparts.

There is one more reason for the spike, which is the second component of the charge. Often, companies with vast global presence, hold their profits abroad for a better tax rate.  In a move to stimulate the repatriation of foreign profits, the government has given financial institutions a special break to do this at a rate of just 15.5%. Most major US banks operate primarily within the country, except Goldman Sachs and Citigroup. 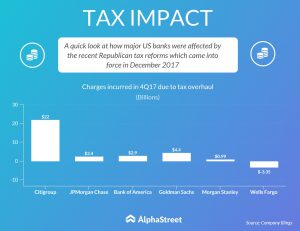 The curious case of Wells Fargo

Wells Fargo has been in news for the whole of last year for all the wrong reasons. However, it benefited from a tax gain, while all the others suffered charges in the fourth quarter, due to lack of foreign operations as well as owing less tax on certain businesses, where the revenues are recognized at various time points. Other domestic financial firms such as PNC Financial Services and US Bancorp also reported benefits, rather than charges, from the tax reform during the quarter.

The objective of the tax reform was not just to aid the corporates, but to pass on the benefits to workers and shareholders as well.  So far, over 70 financial firms including Wells Fargo, Bank of America, Comerica, Fifth Third Bancorp and US Bancorp have announced plans to raise wages and offer bonuses to employees.

Goldman Sachs and Morgan Stanley posted ridiculously high declines in fixed income trading of 50% and 46% respectively in the fourth quarter.

JPMorgan, Citigroup and PNC have hinted at transferring the benefits to shareholders through higher dividends and share repurchases, though more firms are expected to join the bandwagon.  However, we are sceptic when it comes to job creation in the sector, which has witnessed a massive bloodshed over the past few years. Still under pressure to cut expenses due to narrow interest margins and weak trading, the chances of hiring more employees are almost nil.

Trading and other traditional challenges

With the tax burden off its shoulders, it’s high time the industry turns its focus to the hitches in the traditional operations. All the banks reported exceptionally poor trading revenue throughout last year due to low volatility and low interest rates, despite some minor raises from the Fed.  Goldman Sachs and Morgan Stanley posted ridiculously high declines in fixed income trading of 50% and 46% respectively in the fourth quarter. There was hardly any positive equity trading happening either.

Though some executives have said that they have witnessed signs of change in 2018, these comments can still be classified only as speculations. The banks also need a strategic approach to tackle the stagnated loan growth and weakening efficiency ratios.  When it comes to net interest income, most banks seem to be getting back of track, except Wells Fargo. 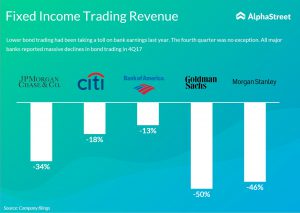 The bright spot for banking operations at the moment appears to be investment banking. The combined investment banking revenue in the fourth quarter was the largest in over two years, according to Bloomberg. With easing tax restrictions, the arena is expected to be more M&A friendly in 2018, with better opportunities for investment banking segment.

The tax relaxation will definitely be a positive for the industry in 2018, as the chief executives of every bank has highlighted and stated. With net interest income gaining some strength and huge stock buybacks on the cards, the banks are slated to report considerably higher per-share earnings.  Dividend seekers can also expect to snatch a piece of the tax benefit pie. With the Trump card on the table, the financial institution is currently, for sure, too big to fail.