The Great Recession might have hit our health as well: Study

Preferred to as the worst economic calamity, the economic recession from 2007 to 2013 impacted the world on different scales. Some of the effects of the Great Recession were already visible, but some took time to unfold. A recent finding by Teresa Seeman from the Geffen School of Medicine at UCLA highlights a direct link between the financial crisis and the high blood pressure-blood sugar levels in American adults.

Several papers have looked at the impact of the devastating event on American households, with most of them focusing on the health impacts due to the Great Recession, a calamity related to the financial crisis of 2007–08 and U.S. subprime mortgage crisis of 2007–09. 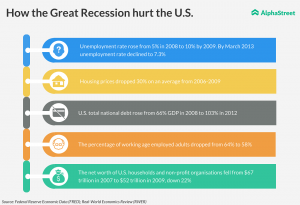 The study published in the Journal Proceedings of the National Academy of Sciences found that the younger adults of age group below 65 (who needed jobs) and older homeowners of age group above 65 (who witnessed the housing market crash) were the ones that were severely impacted. This economic stress led to an increase in blood pressure as well as blood glucose levels. The impact was much more significant among those on medication, indicating the Great Recession took an enormous toll on those who were already on medication.

The finding was based on the study done by using large data sets from Multi-Ethnic Study of Atherosclerosis that were accumulated before and after the catastrophic event. The study included 4,600 participants of age 45-84 years old.

Though the country has recovered from the Great Recession that swallowed more than 8 million jobs and deprived thousands of their homes, the scars remain. The latest report by the Bureau of Labour Statistics found that the rate of unemployment in the U.S. at the end of 2017 was 4.1%. This is the lowest since the recession.

A survey conducted by Rutgers University in 2013 revealed that the Great Recession had impacted one in three people in the U.S.

While many still recall the time with dismay, the long-term effects of the Great Recession are yet to make itself apparent as we move into a new age of e-commerce and trillion-dollar giants.