The mad rush of millennials to cryptos: Should you join the bandwagon?

According to a recent survey, a third of the country’s novice millennial investors prefer to spend their money in cryptocurrencies, rather than stocks or government bonds. The results are not surprising, given the astronomical growth witnessed by Bitcoin last year. The staggering increase dwarfed a decent 25% growth registered by Dow Jones Industrial Average in 2017.

As a noteworthy point, the survey states that most of the people involved in the study had started earning and investing at the time of the financial crisis.  Burning memories of failing stocks during the crisis have developed a sense of aversion for them towards stocks and bonds. 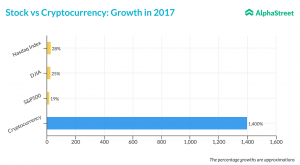 The mad rush gained more pace as Robinhood, a popular trading platform for many millennials, started offering purchase and sale of about 17 cryptocurrencies including Bitcoin and Ripple from February, 2018.

But are cryptocurrencies really a better alternative?

A majority of the youths invest in bitcoins without understanding the core concepts or inherent risks. The sole logic behind the investment is last year’s performance, which has nothing to do with this year’s performance. For example, when writing this article, bitcoin was trading at $9,797, down from close to $20,000 last year. Not a great start in 2018, right?

The high volatility of coin price is a double edged sword. While in good market conditions it can skyrocket, it can also lose all the gains within a matter of minutes on bad news. And this year so far has been terrible in churning out good stories to boost the digital currencies.

This year so far has been terrible in churning out good stories to boost the digital currencies.

Starting off with a trading ban in China to the recent Facebook ban on cryptocurrency ads, Bitcoin and other altcoins have been weighed down by back-to-back negative news in January.  Adding to these were the few cases of hackers stealing  investors’ hard-earned wealth from some exchanges, leaving behind a just a walletful of regret.

All this contributed to Bitcoin losing as much as 40% of its value in January, a massive fall that mirrored across other coins as well.

Digital currency has an uncertain future; JP MorganChase CEO Jamie Dimon openly called Bitcoin a “fraud,” though he later lightened his stance.  There are many who have been spooked, rather than surprised, by the growth, dubbing it a “scam” or “Ponzi scheme.” The truth is that, we still don’t know the truth. All this could be part of a big sham. Or not. Digital currency is therefore, more risky than the riskiest stock.

Looking ahead, one highly possible scenario is the regulation of cryptocurrency, but we are still unsure how the market would respond to it.

All said and done, one thing is sure. No stock exchange offers a rapid trading platform like crypto, which cajoles fresh investors.

Crypto makes stocks look like bonds (a much safer bet). The primary problem with digital coins is that there are plenty of them. Some are popular; some others are trying to solve the problems faced by the popular ones; and even others that are trying to solve the problems that have already been solved. Stocks are easier to pick, since you already know a lot about the company; you might even be using some of their products.

The truth is that, we still don’t know the truth. All this could be part of a big sham. Or not. Digital currency is therefore, more risky than the riskiest stock.

If long-term investing is in your mind, you should look at stocks. If you want to play some “Wolf of Wall Street,” cryptocurrency will surely offer you a more active and addictive platform.

We would suggest that you invest a small amount in digital currency, and the majority share in the more realistic domain of stocks and bonds.