Tilray (NASDAQ: TLRY) stock has fallen over 47% in the year so far. The stock has been on a downward trend since mid-2018, as questions arose about the safety of cannabinoid that is found in marijuana for human consumption. This question still remains unanswered as the Federal Drug Administration recently divulged its doubts about the risks of cannabis food products in its first public hearing.

Cannabinoid is still not allowed in dietary foods or supplements despite medical marijuana being permitted to treat various ailments, including severe pain and nausea. It is certain that regulation on cannabidiol (CBD) could take years to be drafted and implemented as the FDA gathers evidence about the efficiency of the food products infused with the nonintoxicating compound.

Cannabis companies have been seeking to get the FDA to permit the sale of cannabis-derived dietary supplements and foods products. Due to the recent market weakness, Tilray stock has been avoided by investors. Instead, market analysts have recommended buying the highest quality name in the group, Canopy Growth (NYSE: CGC), or the cheapest Aurora Cannabis (NYSE: ACB). 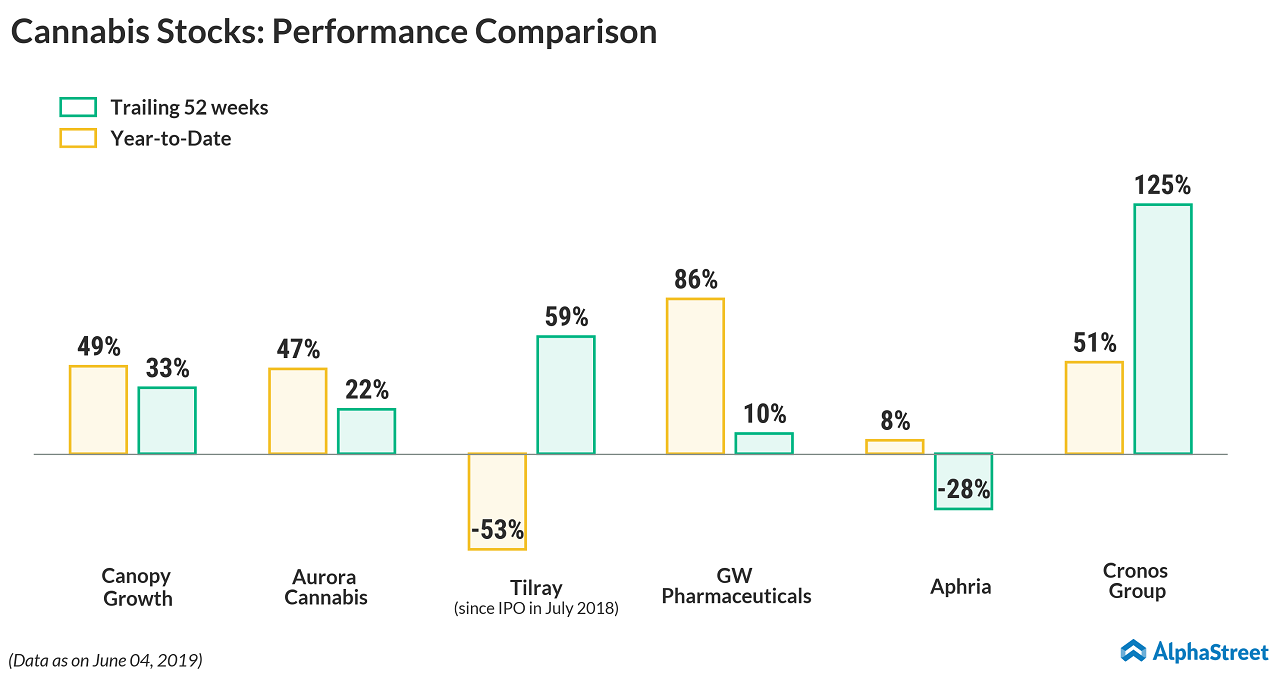 In 2018, sales of legal marijuana in the US nearly doubled to $10.4 billion from $5.4 billion in 2015. This year, sales are anticipated to grow nearly 24% to $12.9 billion. Analysts expect the market to continue growing significantly in the next 10 years with the legalization trend proving to be nearly unstoppable.

In the wave of legalization of marijuana, weed is now the fastest-growing industry in America. Investors believe that buying tiny marijuana stocks right now could build their portfolio and turn them rich in the long-run.

In mid-2018, investors had preferred Tilray as a better low-priced cannabis stock due to the cannabis craze. Tilray went from $20 in July 2018 to $200 in September 2018 on pure speculation. The stock hit $300 on September 19, 2018. Ever since, the stock has come crashing down despite big investments coming rushing into the cannabis market with Cronos Group (NASDAQ: CRON) scoring a multi-billion investment from Altria (NYSE: MO).

Traders believe a hugely positive catalyst could turn the Tilray stock ship around from the downtrend. The catalyst could be a big investment from companies into Tilray but the most likely destination for investment will be Aurora due to the bigger size and cheaper alternative to Tilray. An investment in Aurora could send shares of Tilray on the downward track.

An approval from the FDA is long awaited as Tilray has already set its footprint on the US by purchasing Manitoba Harvest, a large-scale hemp food manufacturer. Manitoba’s products are sold in more than 16,000 stores throughout the United States and Canada, and this includes Hemp Bliss milk, Hemp Hearts, and Hemp Yeah granola bars and protein powder. Tilray’s newest subsidiary will roll out a line of CBD-infused hemp extracts for the US market by this coming summer.

Meanwhile, Tilray’s Portugal subsidiary received a standard manufacturing license and a Good Manufacturing Practices (GMP) certification for its Biocant Park manufacturing facility in Cantanhede, Portugal. This will allow Tilray Portugal to manufacture and export GMP-certified dried cannabis as an active substance for medicinal products from Portugal to Germany, other EU member states and international markets.

Over the Memorial Day weekend, the Transporation Security Administration quietly changed its cannabis policy that allows passengers to bring some forms of CBD oil, plus an FDA-approved marijuana-based drug, on flights.

When marijuana is legalized, Manitoba’s advanced distribution network could prove crucial to giving Tilray an edge over many of its Canadian competitors. Then the stock could head north.