Shares of luxury homes builder Toll Brothers (TOL) fell sharply after the company reported a marked decline in new orders for the fourth quarter and provided weak outlook for the first quarter of 2019. Meanwhile, revenues and earnings rose to record highs and topped analysts’ forecast.

During the three-month period, revenues jumped 21% year-on-year to $2.46 billion, aided by a 12% growth in home deliveries to 2,710 units. Driven by the above-consensus top-line performance, net profit surged to $311 million or $2.08 per share from $192 million or $1.17 per share in the fourth quarter of 2017, exceeding the Wall Street estimates. 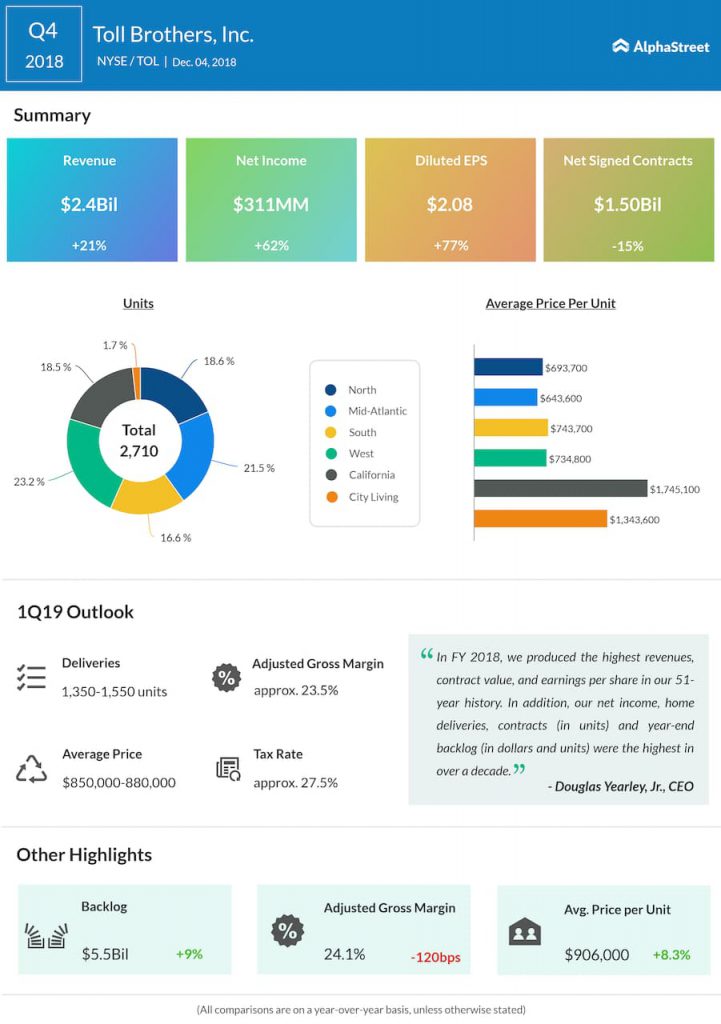 Meanwhile, net signed contracts, a measure of expected homebuilding activity in the future, dropped 15% to $1.5 billion, with the number of contract units falling 13% year-on-year. Buyer sentiment was dampened by the ongoing housing slowdown and rising interest rates. Higher prices and a lack of interest among overseas buyers, especially in markets like California, added to the slump.

During the three-month period, revenues jumped 21% year-on-year to $2.46 billion, aided by a 12% growth in home building deliveries

“Toll Brothers is well-positioned to take advantage of this strong economy, improving demographics and the financial health of our affluent customer base. Most importantly, we have a tremendous team of Toll Brothers associates who made FY 2018’s record results possible and are preparing us for a bright future,” said CEO Douglas Yearley.

Last week, statistics published by the government revealed that new home sales in the US dropped further in October, marking the 11th consecutive fall, hurt by high prices that prompted prospective buyers to postpone their purchases.

For the third quarter, the Horsham, Pennsylvania-based company reported a 30% growth in earning, supported by a sharp increase in home deliveries. Revenues surged 27% annually, reflecting broad-based demand growth. However, the outlook fell short of expectations.

Shares of Toll Brothers dropped soon after the earnings report but recouped a part of the loss as trading progressed Tuesday. The stock, which fell about 35% since the beginning of the year, closed the session down 1.6%.