Micron (MU) shares opened 5.5% in red during pre-market trading today after reporting market-beating fourth quarter results on Thursday. The stock was hurt by CFO David Zinsner’s revelation that President Donald Trump’s tariffs on Chinese imports will weigh on the company’s margins in the coming quarters, till proper mitigation measures are put in place.

The semiconductor giant’s shares had picked up as much as 4% during after-market trading on Thursday, despite the company guiding first quarter results below street estimates. However, Zinsner later clarified during the earnings conference call that the lower guidance projection was due to the expected impact from the 10% tariffs on $200 billion of Chinese goods, which will go into effect on September 24.

Zinsner added that the company would take up to a year to take appropriate measures to mitigate the losses from these tariffs. “We are working on steps to mitigate that, that obviously take some time. We have to do some things operationally to get ourselves in a place where it isn’t impactful, and so it will be a quarter or two probably before we start to see some benefit from the improvement there,” he said.

The comments sent shares down more than 7% during after-market trading on Thursday, the continuation of which is visible today. 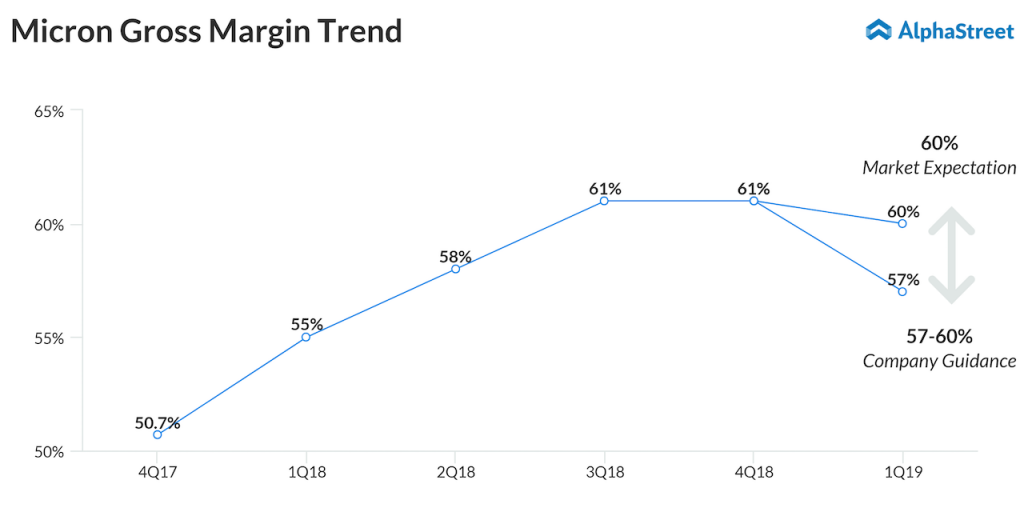 It may be noted that China is a prime revenue driver for the country, accounting for over 50% of its topline. While it does not make semiconductors in China, numerous assembling and packaging works take place in the country. Therefore, Trump’s tariffs, which will be raised from 10% to 25% by the end of 2018, will likely dent Micron’s gross margins by at least 50 BP.

The Boise, Idaho-based company, which makes memory chips for smartphones, will now be forced to shift at least a part of its Chinese operations to assembly plants in Singapore.

Micron reported better-than-expected fourth quarter earnings of $3.53 per share on a 37.5% increase in net sales of $8.4 billion. The results were driven by strong demand for its DRAM and NAND chips across markets.