After tapping the potential of live streaming service successfully, Twitter (TWTR) is currently busy giving a new perspective to creative programming and video-on-demand in the field of esports.

The microblogging platform has joined hands with Overwatch League, an esports league created by Blizzard Entertainment (ATVI), to provide highlights and live stream content of the upcoming matches. To start with, Twitter will carry on its platform Overwatch’s All-Star Weekend event to be held this Saturday and Sunday in Los Angles, thereby giving fans a taste of what is in store for them.

The multi-year deal includes the launch of a preview show called Watchpoint that will be available for viewing every week, starting early next year when the next Overwatch League season is scheduled to kick off. The focus of the show will on offering statistics, analytical viewpoints and predictions to viewers.

Besides providing live stream content, highlight clips of all regular matches, playoffs and finals will stream in ‘near-real-time’ on Twitter, which will make the service available through @overwatchleague.

A comparatively new entrant in the esports arena, Overwatch League gained popularity after it came up with a city-based franchising model, a first in the sector. In the inaugural season, London Spitfire took the title in the final held at Barclays Center in Brooklyn.

Earlier, Twitter had collaborated with Activision to stream the Duty World League and with Electronic Sports League to distribute its matches.

Twitter shares gained about 41% since the beginning of the year – hitting a three-year high in June. The stock, which has been struggling to recover from the loss suffered after the company last month reported a fall in user base and issued weak guidance, gained about 2% in early trading Thursday.

Meanwhile, Activision Blizzard traded lower in the initial hours, extending the downturn started about a month ago. 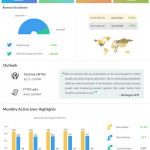