The increase in net income on a year-over-year basis was primarily due to total net revenue growth of 3.5%. Net interest income increased 4.9%, mainly as a result of the impact of rising interest rates and earning assets growth.

Early this year, the American lender was fined $613 million due to poor money laundering controls. According to the U.S. Justice Department, the company deliberately ran inappropriate an anti-money-laundering program from 2009 to 2014, through its subsidiary U.S. Bank National Association. According to Reuters, if the bank meets the terms of the agreement, the charges against it would be dismissed. 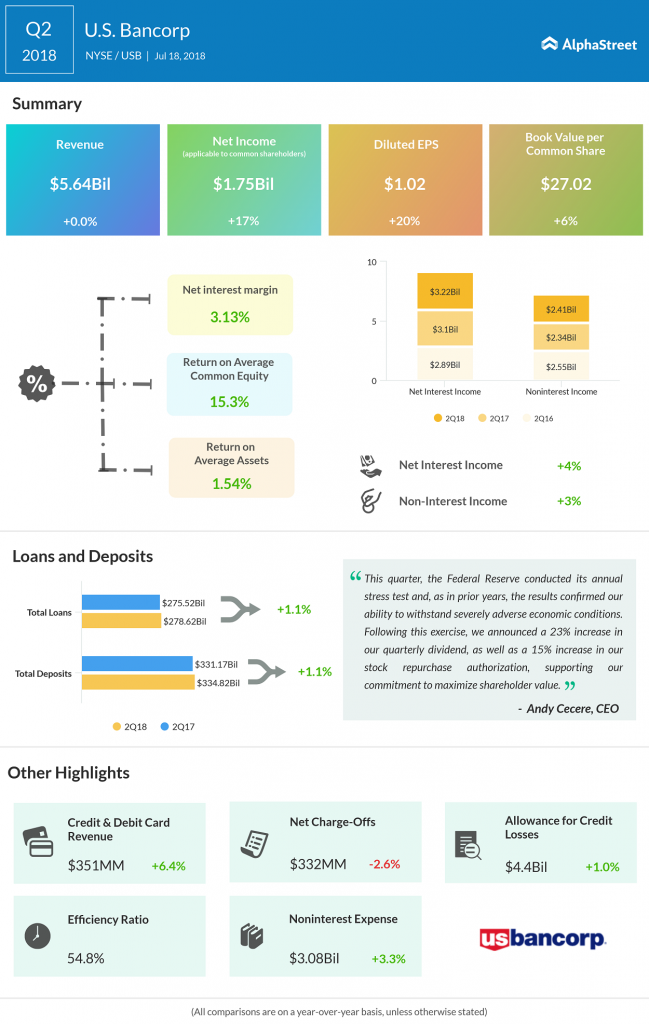 The company’s board also approved an increase in the quarterly dividend to $0.37 per share beginning in the third quarter of 2018, as well as a new share repurchase program for the year.

Along with U.S. Bancorp, Morgan Stanley (MS) too reported its earnings today, concluding the earnings for major US banks. Morgan Stanley smashed past analysts’ expectations during Q2 2018, aided by strong performance in investment banking and trading. The bank reported earnings of $1.30 per share, topping analysts’ expectation of $1.08. Revenue during the quarter rose to $10.6 billion, topping the consensus estimate of $10.5 billion.

Despite the earnings beat, shares of U.S. Bancorp dropped 1% during the first hour of trading session today. The stock was trading between $58.50 and $48.49 during the past 52-week period.