On Thursday, Under Armour (UA, UAA) witnessed a surge in its share price after the company beat top-line estimates during its second-quarter. During the quarter, the company reported a net loss of $96 million, or $0.21 loss a share. Excluding items, the company posted loss of $0.08 a share, that managed to meet Wall Street estimates of $0.085. Revenue came in at $1.17 billion, up 8% from the same period a year ago. This was above analysts expectations of $1.15 billion.

Much of this increase was attributable to the growth in the sportswear brand’s international business, that represented 26% of the total revenue. The overseas business saw a 28% boost in its revenue to $302 million during the quarter.

The sneaker maker has been working on expanding its footprint in foreign markets in order to lower its dependence on the North American apparel market, which at the moment, is experiencing a severe drop in demand. Over-reliance on North American revenues led to heavy losses for the company in the past.  During the second quarter, North America revenue increased by just 2% to $843 million.

Apparel revenue, during Q2, increased 10% to $747 million, driven by strength in training and running. Meanwhile, footwear revenue was up 15%  to $271 million and accessories revenue decreased 14% to $106 million due to softer demand.

Related: Under Armour paces past sales estimates in first quarter

The Baltimore, Maryland-based company is spending heavily on its overseas expansion. In order to boost its sales, in February, the company announced its 2018 restructuring plan, in which the company estimated to incur restructuring and related charges of approximately $110 – 130 million.

Related: Adidas and Nike are showing the new kid Under Armour its place

“The ongoing improvements in our structure, systems and go-to-market process across our global business better position us to drive a more consistent, predictable path to deliver for our consumers, customers, and shareholders over the long-term,” said CEO Kevin Plank.

Under Armour also updated its 2018 outlook. For the full year,  the company now expects revenue to increase 3-4% reflecting low to a mid-single-digit decline in North America and international growth of over 25%. In the prior outlook, the company expected net revenue to climb a low single-digit percent. 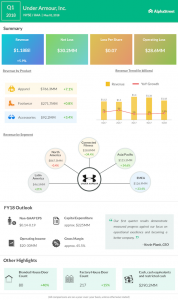