Undeterred by crisis, Bank of America stays in expansion mode

Released $2.7 billion of loan loss reserves, which contributed significantly to first-quarter profit that more than doubled

Leading Wall Street banks recorded robust earnings in the early months of fiscal 2021 with the results benefiting from the release of credit loss reserves, in most cases. Taking advantage of its operational stability, Bank of America Corporation (NYSE: BAC) continues to expand to new markets and explore new sales resources despite the challenging conditions.

The Charlotte, North Carolina-based banking behemoth is considered a safe bet from an investment perspective, thanks to its dependable business model and strong fundamentals. With a valuation that is well below the industry average, the stock has the potential to offer handsome returns in the long term. The price target on the stock is $41.57, which represents a 6.3% upside. The bank has raised its dividend regularly over the years, though on a modest scale. 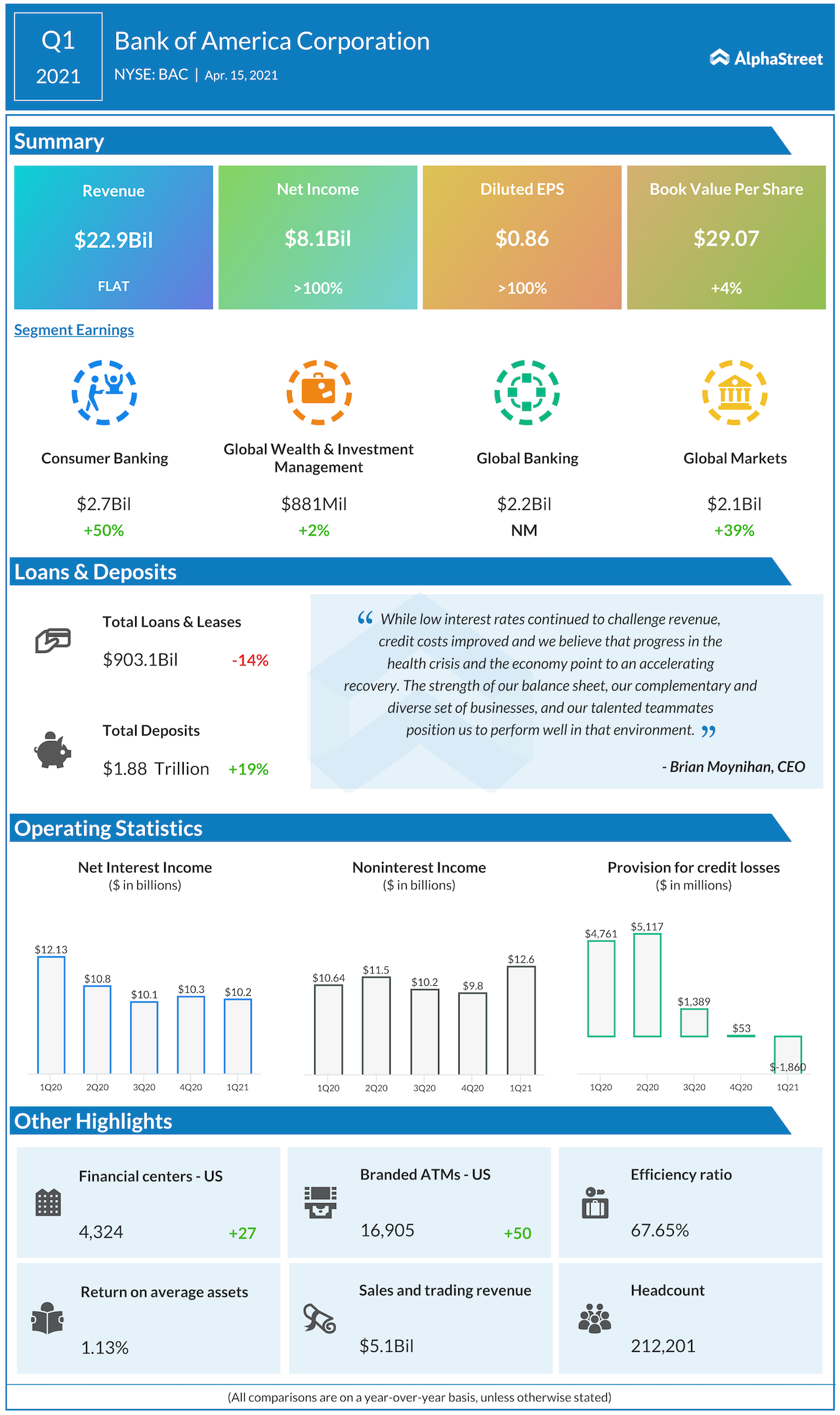 Bank of America’s first-quarter revenues remained unchanged at $23 billion, reflecting the continued weakness in credit demand that weighed on net interest income. It was offset by an increase in non-interest income and the top-line came in slightly above the market’s prediction. Like its peers, Bank of America also released a significant portion of its bad-loan reserves during the quarter. As a result, earnings more than doubled to $0.86 per share, exceeding the consensus forecast.

“Card applications and mortgage originations continue to increase in each of the last three quarters. This along with mortgage rates moving higher and driving lower prepayments and run off of current mortgage loan sets up consumer loan growth. That strong customer liquidity obviously negatively impacts loan growth but has benefited credit costs. We saw quarter one net charge-offs remaining below pre-pandemic levels in dollars and percentage, further supporting a reduction in our credit reserves this quarter,” said Bank of America’s chief executive officer Brian Moynihan.

Going forward, interest income can benefit from the central bank’s hawkish policy stance. The impressive scale of operation and extensive client base give the bank an edge over the new-generation online lenders. Moreover, it has persistently stayed in the expansion mode over the years, investing several billions of dollars in the business.

It is estimated that improvements in customers’ financial position and the government stimulus would continue to ease credit costs and enhance asset quality for Wall Street banks. However, costs related to COVID safety would remain elevated and squeeze margins.

Bank of America’s stock declined this week after the market responded negatively to the mixed earnings report. Earlier this month, the stock traded at the highest level since crashing to the single-digit territory during the 2008 recession. After last year’s virus-induced sell-off, the shares bounced back and are currently trading above the pre-pandemic levels. The company’s market value increased about 30% so far this year.