United Rentals (NYSE: URI) will be publishing its third quarter 2019 earnings results on Wednesday, October 16, after the market closes. Wall Street estimates the equipment rental company to post earnings of $5.66 per share on revenue of $2.45 billion for the quarter ended September 30, 2019. This represents an earnings growth of 19% and revenue growth of 16% compared to the third quarter of 2018. URI stock inched up 0.24% to $118.68 when the market closed today.

The healthy performance in the end markets the company serves and the growth across the geographies are expected to benefit the Stamford, Connecticut-based company’s third quarter results. 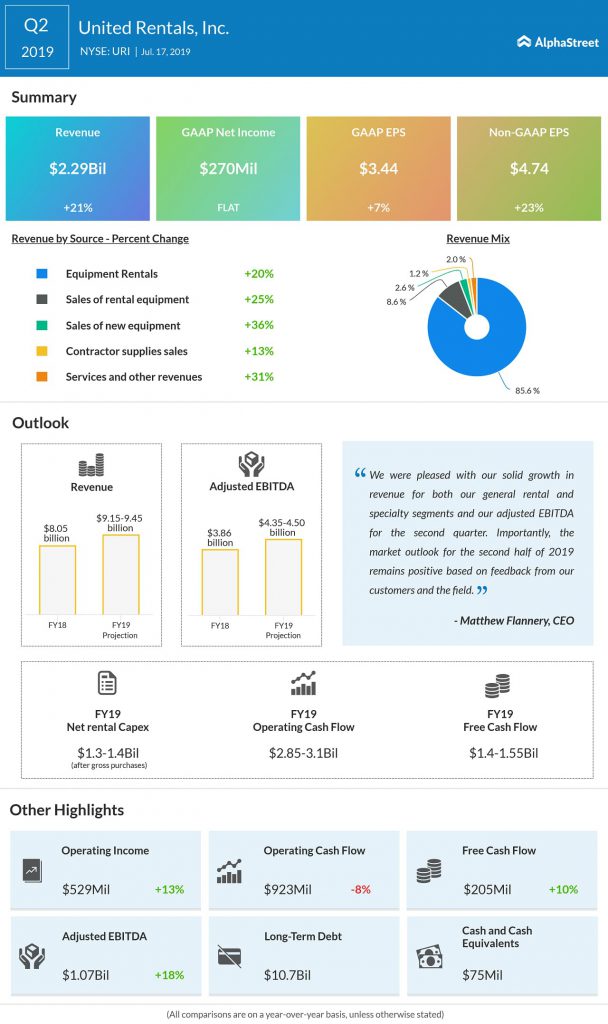 When United Rentals reported its second quarter results in July, the company blew past the consensus views. Earnings of $4.74 per share surged 23% year-over-year, while revenue rose 21% to $2.29 billion. However, United Rentals cut down its upper end of the fiscal year 2019 outlook, sending the stock in the downward direction.

Hurt by the slightly lower than expected pace for the BlueLine integration and the bad weather in several key regions during the second quarter, United Rentals trimmed down its FY19 forecast. The company’s fleet productivity for the second quarter ended June 30, 2019, dropped 3.1% year-over-year, primarily due to the impact of the BakerCorp and BlueLine acquisitions.

United Rentals had projected strong demand environment in the second half of the year and fleet productivity to get back to over 1.5% in the third quarter.

Last week, UBS downgraded its rating for United Rentals from Buy to Neutral and Morgan Stanley maintained its rating of Overweight. On average, analysts have set a 12-month price target of URI at $151.92.

URI shares have increased 16% since the beginning of this year. However, the stock price had dropped 14% from this time last year.