Shares of aircraft manufacturer United Technologies (UTX) increased about 3% in the pre-market trading after the Q1 results surpassed estimates. United saw strong growth across the board, aided by the contribution from the recently acquired Rockwell Collins.

The company now expects adjusted earnings for fiscal 2019 to be between $7.80 and $8.00 per share compared to the earlier projected range of $7.70 to $8.00 per share. However, the sales outlook remains unchanged at $75.5 billion to $77 billion. United expects one-time charges related to separation to be $1.5 billion.

Commenting on the Q1 results, CEO Gregory Hayes said, “United Technologies is off to a strong start in 2019. Earnings and cash flow exceeded our expectations for the quarter reinforcing our confidence in the full year financial outlook.” He also added that “We remain on track to establish Otis and Carrier as independent companies in the first half of 2020.” 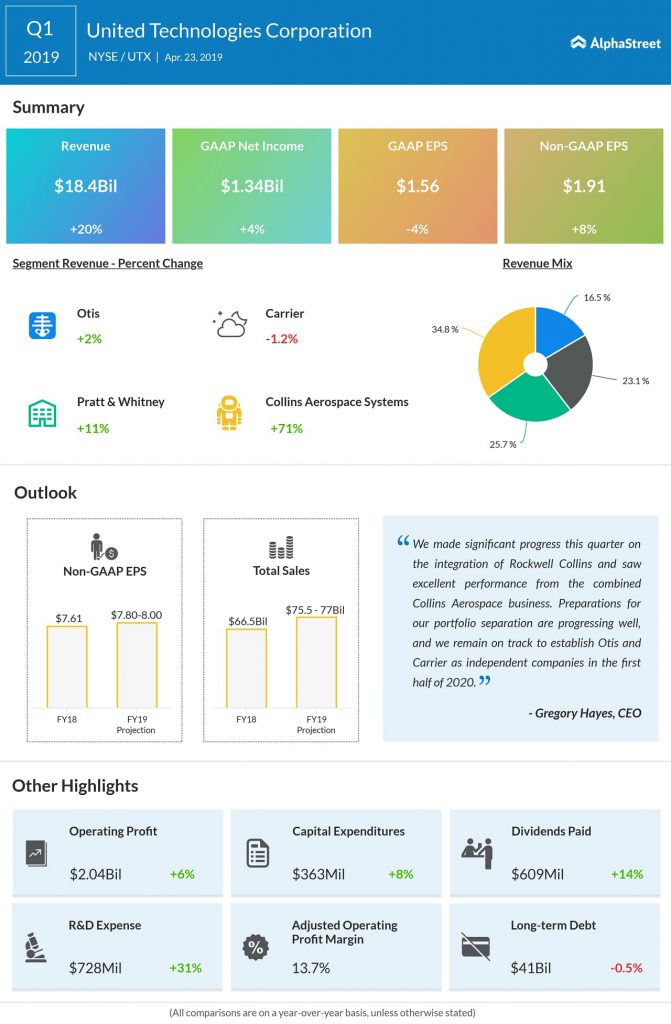 Sales jumped 20% to $18.4 billion boosted mainly by solid revenues from Pratt & Whitney and Rockwell Collins acquisition, surpassing street estimates of $18 billion. Adjusted EPS improved 8% to $1.91, which exceeded analyst estimates of $1.71 per share. Non-GAAP profit margins improved modestly to 13.7% over 13.6% reported last year. Collins Aerospace margins came in at 16.9% compared to 16.1% in the prior year period.

Last year, United decided to split itself into three different entities post the Rockwell Collins deal. CEO Hayes reiterated today that the firm is on track to complete portfolio separation by the first half of 2020. Post the spin-off, United will be focusing on the aviation space comprising of Collins Aerospace Systems and Pratt & Whitney. United expects to see improvement in sales and earnings once the separation is completed next year.

Shares of United has increased by nearly 29% this year and has risen 11% in the past 12 months.