Airline stocks are set to report third-quarter earnings starting with Delta Air Lines reporting Thursday morning. With the rising jet fuel prices continuing to drag the profitability of many airlines, investors will be looking forward to the companies’ plan on tackling this pressure. 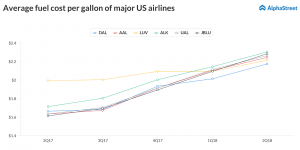 Delta Air Lines (DAL) is set to kick-off the airline industry earnings tomorrow before the market opens. In its recent investor update, Delta revealed that Hurricane Florence will have a $30 million negative impact on the pre-tax income for the third quarter, denting unit revenues by negative 0.5 point. Total unit revenues (TRASM) growth is expected to be 4 – 4.5% vs. the previously forecasted growth of 3.5% – 5.5%. The company expects diluted earnings per share in the range of $1.70 to $1.80. Wall Street analysts trimmed the third quarter EPS forecast to $1.76 from $1.78 after the recent investor update from the airline.

American Airlines (AAL) is expecting approx. $50 million of negative impact on the pre-tax income for the third quarter due to the impact of Hurricane Florence that led to nearly 2,100 flight cancellations, according to the company’s recent SEC filing. Despite the storm impact, the world’s biggest airline raised a total revenue per available seat miles (TRASM) growth to 2-3% from previously guided 1-3%. Analysts are expecting earnings of $1.21 per share for the third quarter of 2018. Shares of American Airlines are down more than 35% year-to-date.

Southwest Airlines (LUV) is scheduled to report its third-quarter earnings on October 25 before the market opens. The company has canceled nearly 2,000 flights during July and August due to the impact of storms. As a result of the cancellations, Southwest is expecting 0.5-1 point year-over-year benefit to its operating revenue per ASM for the quarter. Analysts expect earnings of $1.07 per share on revenue of $5.57 billion for the third quarter of 2018.

Alaska Air Group (ALK) will report third quarter 2018 earnings before the market opens on October 25. Alaska Airlines is amongst the airlines hit hardest by the rising fuel prices and fare war, with its stock falling about 16% year-to-date. Like its peer, Alaska Airlines also stopped its underperforming routes to tackle the fuel pressure, but at the same time, started a few new services along the West Coast. Being a leading player in the West Coast, the carrier now focuses on expanding its presence in that region in order to boost its profitability.

With about 18% growth in the stock price year-to-date, United Airlines (UAL) is the best performer amongst its peer in what is said to be a difficult year for airlines. The airline will report its third-quarter 2018 earnings on October 17. Analysts expect the airline to report earnings of $3.06 per share for the third quarter, a 37.8% growth over the prior-year quarter’s adjusted EPS of $2.22.

After seeing a strong growth momentum in 2016 in terms of profit, JetBlue Airways Corporation (JBLU) has since been struggling to keep up the pace. Profits have been sliding in recent times, causing the stock to decline over 22% year-to-date. The company, however, is optimistic about growing its profitability by 2020 with initiatives like offering basic economy, cost reduction program and discontinuing underperforming flights. As the airline reports Q3 results on October 23, analysts expect JetBlue to post earnings of $0.44 per share.

Want to stay ahead of the market? Get access to timely and accurate verbatim earnings transcripts that are published within hours of the event.