What does the new year hold for the automotive industry

The US auto industry is on the path of a major transformation, characterized by changing customer behaviour and rapid adoption of elective vehicles. For automobile companies, 2022 was one of the toughest years, in terms of sales and profitability, with supply-chain hurdles and inventory issues affecting deliveries. The situation is unlikely to change much this year, thanks to economic uncertainties and rising interest rates that add to the existing problems.

On the positive side, leading auto stocks have dropped to historical lows and become more affordable, bringing cheer to prospective investors. Considering the still-buoyant demand situation – supported by tax credits — automakers will likely regain their lost value in the long term even as supply issues subside and production costs ease. EV players would particularly benefit from the growing appetite for battery-powered vehicles. That said, the future of the industry would largely depend on where the economy is headed — recessionary fears would force companies to be cautious in their pricing strategy.

After recovering from the slump experienced in the early phase of the pandemic, General Motors Co. (NYSE: GM) regained a part of the sales momentum and moved closer to the pre-COVID levels last year. Though quarterly numbers improved, compared to the previous year’s weak data, overall performance remained below the long-term average. In the third quarter, the core GM North America segment grew an impressive 68% year-over-year, driving up adjusted earnings to $2.25 per share. Going by the market’s outlook, the uptrend has extended into the final months of fiscal 2022, the results for which are expected to be out by the end of January.

GM’s stock peaked around twelve months ago, after rebounding from a multi-year low, but reversed most of those gains since then. The stock is around 40% cheaper than it was a year earlier, which can be seen as a safe entry point for long-term investors. The next few weeks would be a good period to invest because GM keeps gaining ahead of earnings, a trend that should continue even beyond the announcement.

An almost similar trend is visible in the performance of rival automaker Ford Motor Company (NYSE: F), which maintained stable sales last year, with quarterly numbers beating estimates most often. But that is not fully translating into profitability – earnings, excluding special items, dropped 41% annually to $0.30 per share in the third quarter when the top-line increased by 10%. Anticipating an improvement in margin performance, analysts expect earnings to more than double in the fourth quarter, aided by a 15% revenue growth. 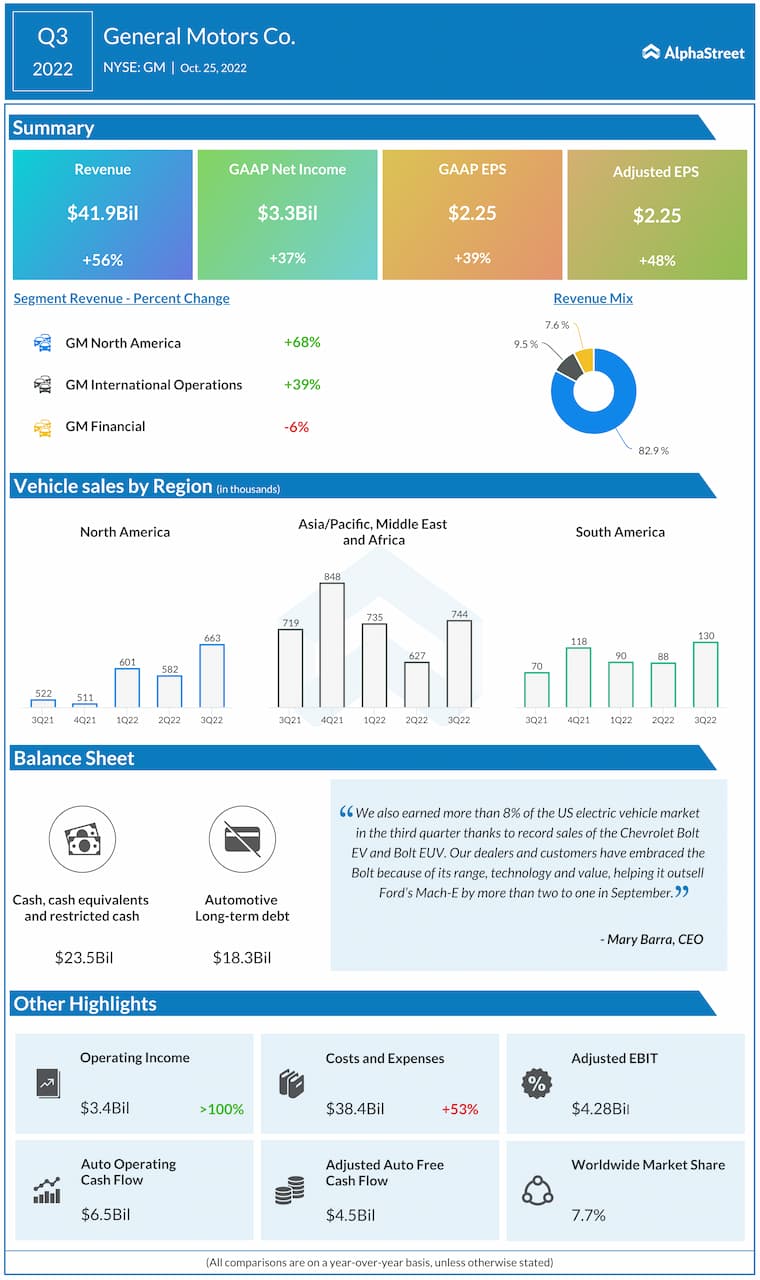 Ford’s stock started 2023 about 50% below the value at which it entered 2022. But it is still better compared to its weak performance in recent years. The shares trade slightly below the long-term average, but they have what it takes to increase shareholder value when market conditions improve.

Meanwhile, it’s a slightly different scenario at Tesla Inc. (NASDAQ: TSLA), the EV giant that keeps grabbing market share from traditional automakers. Investors approach the stock from a different perspective, considering the company’s unique portfolio that differentiates it from manufactures of vehicles that run on fossil fuel.

Tesla has mostly remained resilient to external headwinds and expanded its portfolio and geographical footprint constantly. In the quarter that ended September 2022, Tesla’s profit and revenues climbed to record highs. Interestingly, the top line missed expectations, indicating that market watchers had bigger expectations for the company. The results benefited from record vehicle deliveries and price hikes.

Ford: A look at how the automaker views some of the major changes in the industry

Analysts’ positive outlook suggests that Tesla has the potential to set new records in terms of quarterly financial performance. Meanwhile, the dismal performance of the stock weigh on investor sentiment. In the past six months, Tesla’s market value more than halved, making the stock affordable. A key factor that influences the stock is the company’s delivery numbers – weak Q4 numbers caused a selloff in the early days of the year.

The good news is that the stock is on its way to returning to last year’s highs, more than doubling the price. For those who have been looking to add TSLA to their portfolios, they have a rare opportunity to do so.