Last week, the company announced the acquisition of Figma for about $20 billion, the biggest buyout ever

Adobe Inc. (NASDAQ: ADBE), a market leader in design software, last week received widespread attention after it reported weaker-than-expected third-quarter results, triggering a stock selloff. Investor sentiment was also hurt by reports of the company acquiring design platform Figma, amid concerns that the offer price is too high. The deal invited downgrades from multiple analysts, adding to the bleak sentiment.

But the low valuation should bring cheer to prospective investors, because the stock has become more affordable after the dip. It could be an opportunity that no one wants to miss. Currently trading slightly below the $300 mark, the stock is at a three-year low. But the general outlook on it is positive, with the consensus target price indicating a strong rebound in the coming months.

While Adobe is not very popular among income investors because it does not pay dividends, the company’s fundamentals are as strong as ever. The subscription-based model, which accounts for more than 90% of the total business, provides for consistent cash flows. 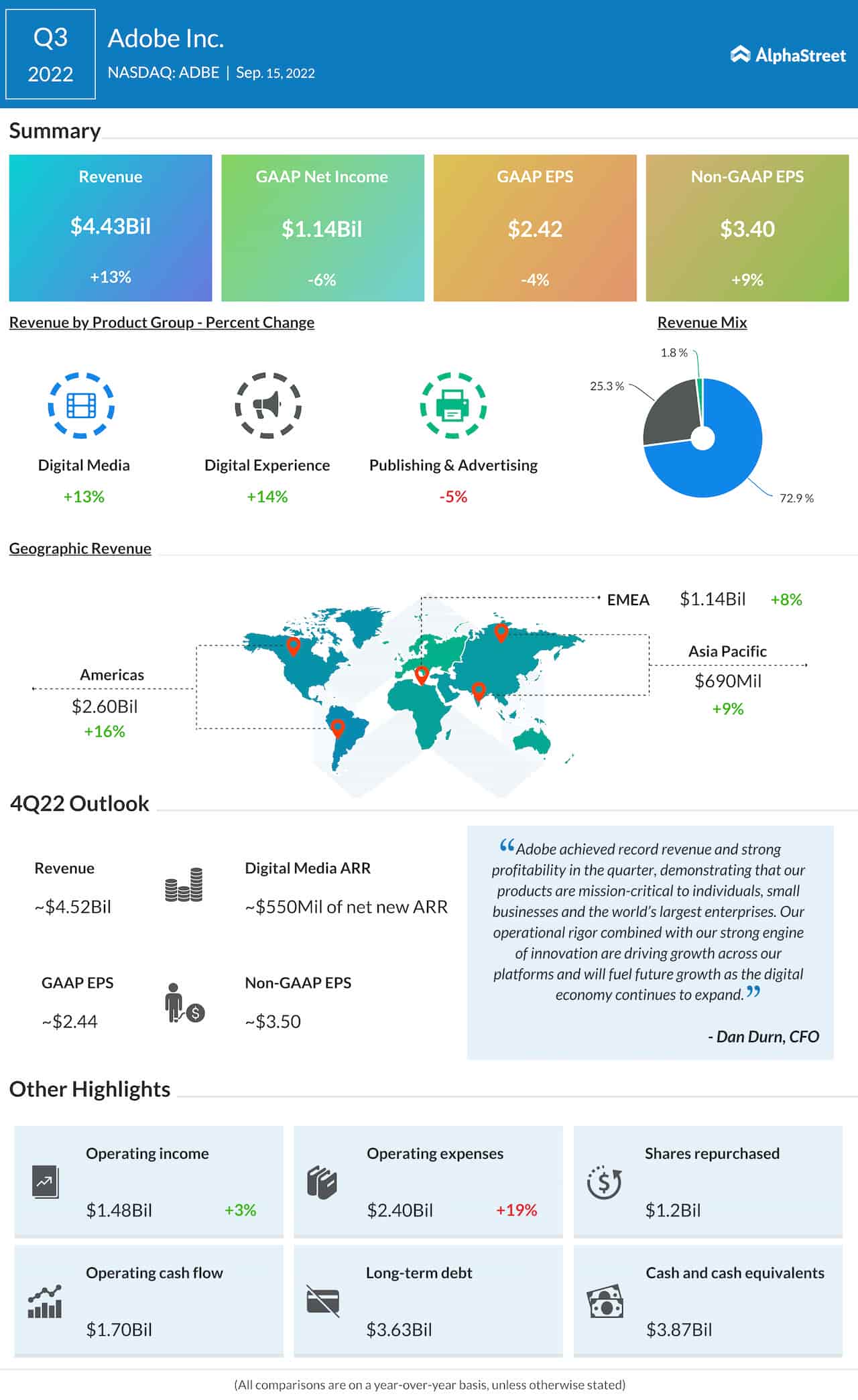 Adobe’s core business enjoys a clear advantage over rivals when it comes to the scale and strength of offerings. The flagship Illustrator, Photoshop, and Premiere Pro software suites are widely used across markets, and continue to be the preferred applications among designers, thanks to the management’s efforts to innovate and ramp up the portfolio.

The company’s earnings for the third quarter missed Wall Street’s projection, ending a multi-year streak of beating estimates. At $3.40 per share, however, adjusted profit was up 9%. That reflects a 13% rise in revenues to $4.43 billion, which also missed the Street view. Remaining Performance Obligations, a key measure of Adobe’s financial health, were $14.11 billion.

Last week, the company announced the acquisition of Figma, a collaborative web application for design, for about $20 billion — its biggest buyout ever. The transaction is expected to close early next year. Meanwhile, the size of the deal and the timing has raised skepticism among investors, who will be closely tracking the company’s performance in the final months of the fiscal year.

The acquisition assumes significance against the backdrop of experts predicting that Adobe’s Creative Cloud software might face increasing competition from rivals, considering the changing trends in the market. The management expects that the addition of Figma would make it easier for the company to enter new markets and accelerate growth, at a time when topline growth keeps decelerating.

“Throughout our history, Adobe’s community has been a constant source of inspiration and a catalyst for innovation. Figma has a thriving community who develop and share everything from tutorials, templates, and plug-ins with their large and growing ecosystem. The combination of our communities will bring designers and developers closer together to unlock the future of collaborative design. Adobe and Figma could not be a better match.“

Adobe’s stock, which has lost a dismal 20% in the last two sessions, traded lower on Monday afternoon. The current value is sharply below last year’s peak and the 56-week average.