Of late, there has been a slowdown in the demand for asset management services as investors keep away from stock markets due to the bear market conditions. Concerned about the high inflation and interest rate hikes, people are shifting to safer investments. After entering the fiscal year on a positive note, BlackRock, Inc. (NYSE: BLK) registered a decline in fee income as its customers suffered losses.

The New York-headquartered investment management firm, the biggest player in the industry, generates revenue mainly from investment-advisory and administrative fees charged to institutional and retail customers. It announced a cost-reduction plan after reporting not-so-impressive financial results for the third quarter. Assets under management dropped 16% to $7.96 trillion and revenues declined 15% annually to $4.31 billion, which was partly hurt by unfavorable foreign exchange rates.

At $9.55 per share, adjusted profit was down 16%, which marked the second consecutive decline. While the bottom line exceeded estimates, revenues missed the Street view. On the positive side, net inflows remained stable — though there was a decline year-over-year — helped mainly by continued engagement by institutional investors. The company’s proprietary Aladdin investment management platform, which allows investment professionals to monitor and manage daily investments, has delivered record sales so far this year. 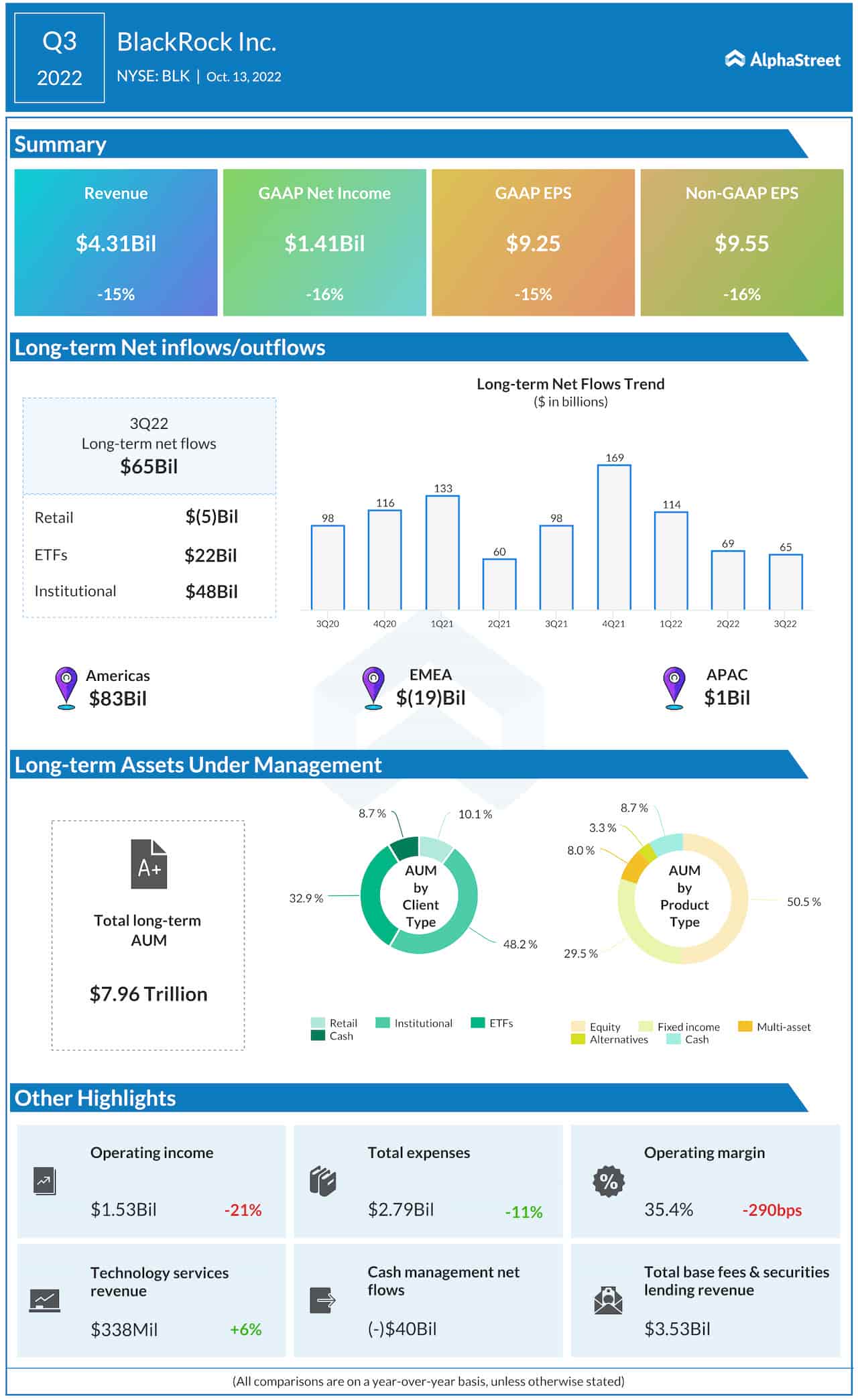 BlackRock’s stock traded at a two-year low this week, after losing steadily since November 2021 when it hit an all-time high. The low valuation has created an investment opportunity worth trying. It is widely expected that the stock would grow in double digits through the second half of 2023. BLK is an all-time favorite among investors, thanks to the company’s strong fundamentals and growing market share.

BLK is an attractive dividend stock with impressive yield and strong annual earnings growth that offer handsome returns. Among the various services the company offers, exchange-traded funds under the iShares brand are exceptionally popular. In the near term, however, the company is likely to keep a low profile in terms of stock market investments, considering the market downturn. But the management has revealed plans to invest in energy pipelines in the U.S., even as BlackRock’s stance on ESG issues is being criticized by lawmakers.

BlackRock’s CFO Gary Shedlin said at the earnings conference call, “while we continue to have a deep conviction in our strategy and the long-term growth of the global capital markets, we have begun to more aggressively manage the pace of certain discretionary spend. We are continuing to pursue critical hires that support our near-term growth but are pausing the balance of our hiring plans for the remainder of 2022. In addition, we now expect our full-year increase in 2022 core G&A to be in the range of 13% to 15%, lower than our previous guidance of 15% to 20% that we communicated in January.”

JPM, MS, C, WFC: A snapshot of the earnings reports from the major banks today

Currently, BLK stock is trading below its 52-week average. The stock, which has lost about 20% in the past six months, closed the last trading session down 3%.