The race for joining the $1 trillion market cap seems to be getting intense in 2018. Amazon (AMZN) is expected to eclipse the 13-digit mark in 2019, according to research firm GBH Insights. The research firm has also lifted the e-commerce giant’s stock price target to $2,000 from $1,850, which is a jump of nearly 15% from the current trading price.

Analyst Daniel Ives of GBH expects Amazon to garner nearly 50% market share of total US e-commerce spending next year, which is a 6% increase from 2017. He also added that the e-commerce giant is going to benefit mainly from Prime membership and cloud services.

In April this year, the company crossed the 100 million user mark for its Prime program, which is a 50% jump from last year. The Prime subscribers are currently paying $119 per year to enjoy perks like free shipping, early delivery and unlimited access to Prime Video and Music etc. The company is expected to augment its Prime user base in North America and international expansion, which will improve the top line.

The company’s Whole Foods acquisition is going to augur well in the impending future on multiple fronts. It would provide Amazon a great platform to offer services on a hybrid model, directly taking on Wal-Mart (WMT). The deal also provides ample opportunity for cross-selling where it can add more people to its Prime membership and improve sales on the Whole Foods front by providing discounts/offers to its Prime members, like the 10% markdown offer it announced recently for Prime subscribers. The improved integration with Whole Foods is going to augur well for the e-commerce giant in the upcoming quarters, which would result in better top and bottom line. 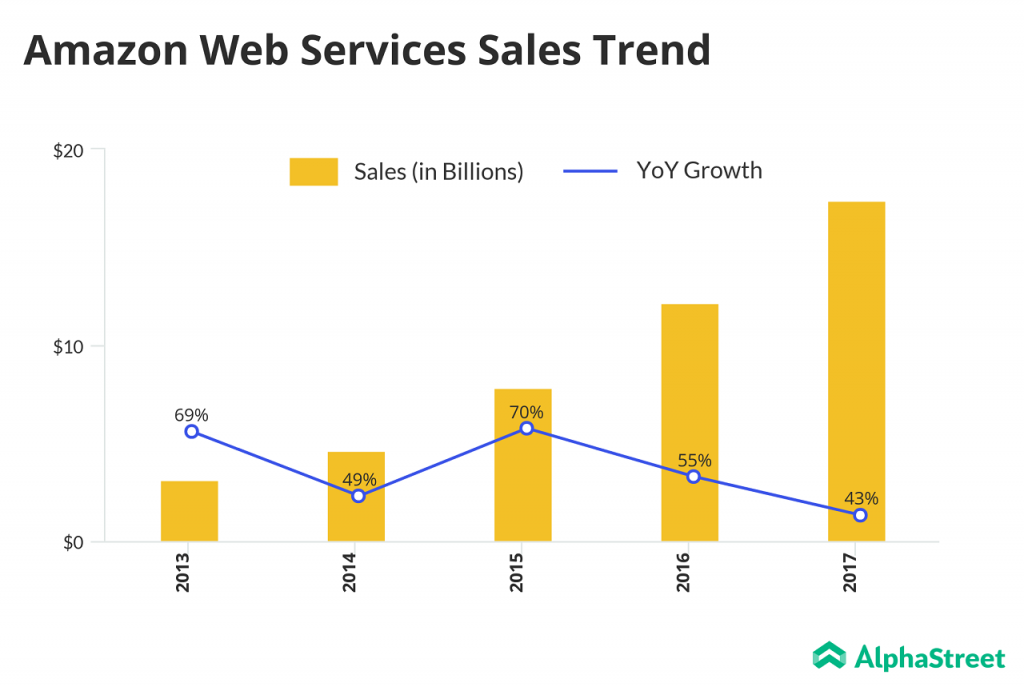 AWS has been another jewel in the crown for the e-commerce giant growing steadily for the past five years. Amazon continues to be the market leader in the cloud services space with more than 30% of the market share. In the recently concluded quarter, the cloud division brought in $5.44 billion, which has been a major contributor to Amazon’s top line. Since e-commerce is a low-margin play, the high-margin AWS has been a big boon to Amazon’s bottom line.

Gartner pegs the global public cloud market to touch $186.4 billion this year, which is a 21.4% growth from 2017. With companies across the globe are getting comfortable about moving their data to cloud, AWS is going to benefit to a great extent with increasing adoption of cloud services.

Last month, Amazon bought PillPack for $1 billion marking its entry into healthcare space. With increasing healthcare costs and the complex nature of the healthcare sector, there is enough room for disruption which is going to beef up the company’s margins in the upcoming quarters. Amazon’s market cap currently hovers around $847 billion. With a strong performance in its core e-commerce business and solid growth in AWS division, Ives expects Amazon’s market cap to touch 13-digit mark in the next 12 to 18 months.

Related: Apple is now so close to $1 trillion mark that there is no stopping it

Apart from Amazon, other tech giants like Apple (AAPL), Alphabet (GOOGL) and Microsoft (MSFT) are in the race to enter the $1 trillion market cap club in the next 12 months. Amazon is expected to announce its second quarter results later this month. The company’s stock price has increased nearly 50% this year and a whopping 75% over the last 12 months.