Will Netflix (NFLX) maintain its dominance in streaming space post-COVID?

Though the bottom-line benefitted from the COVID-related tailwinds in recent quarters, the performance often fell short of expectations

The pandemic has been a boom time for most streaming platforms as the movement restrictions made people consume more digital content than they usually do. The company that benefited most from the demand growth is probably Netflix Inc. (NASDAQ: NFLX). But there are concerns that the momentum might decline once the market reopening picks up pace, which is already happening.

The stock entered 2021 on a positive note and climbed to an all-time high in January, after setting new records regularly. The trend reversed since then and the stock moved into a volatile phase. However, the pullback offers a rare buying opportunity that long-term investors would be keen to grab.

In recent years, several new players entered the streaming space, including big names like Disney+ (NYSE: DIS)and AT&T, posing a challenge to Netflix’s dominance in the market. According to estimates, Netflix’s audience is already drifting to some of the new services. Though the company’s earnings benefitted from COVID-related tailwinds in the recent past, earnings performance often fell short of expectations. Interestingly, some of the new rivals are capable of providing programs that are as interesting as those offered by Netflix.

In short, the management will have to continue investing in original content aggressively — the model that caused heavy cash burn in the past. The pandemic derailed the company’s strategy of creating separate programs for each market, with local flavor, as production schedules were hit by the curbs. However, Netflix looks poised to stay at the top in the near future, leveraging its proven business model with focus on original content. 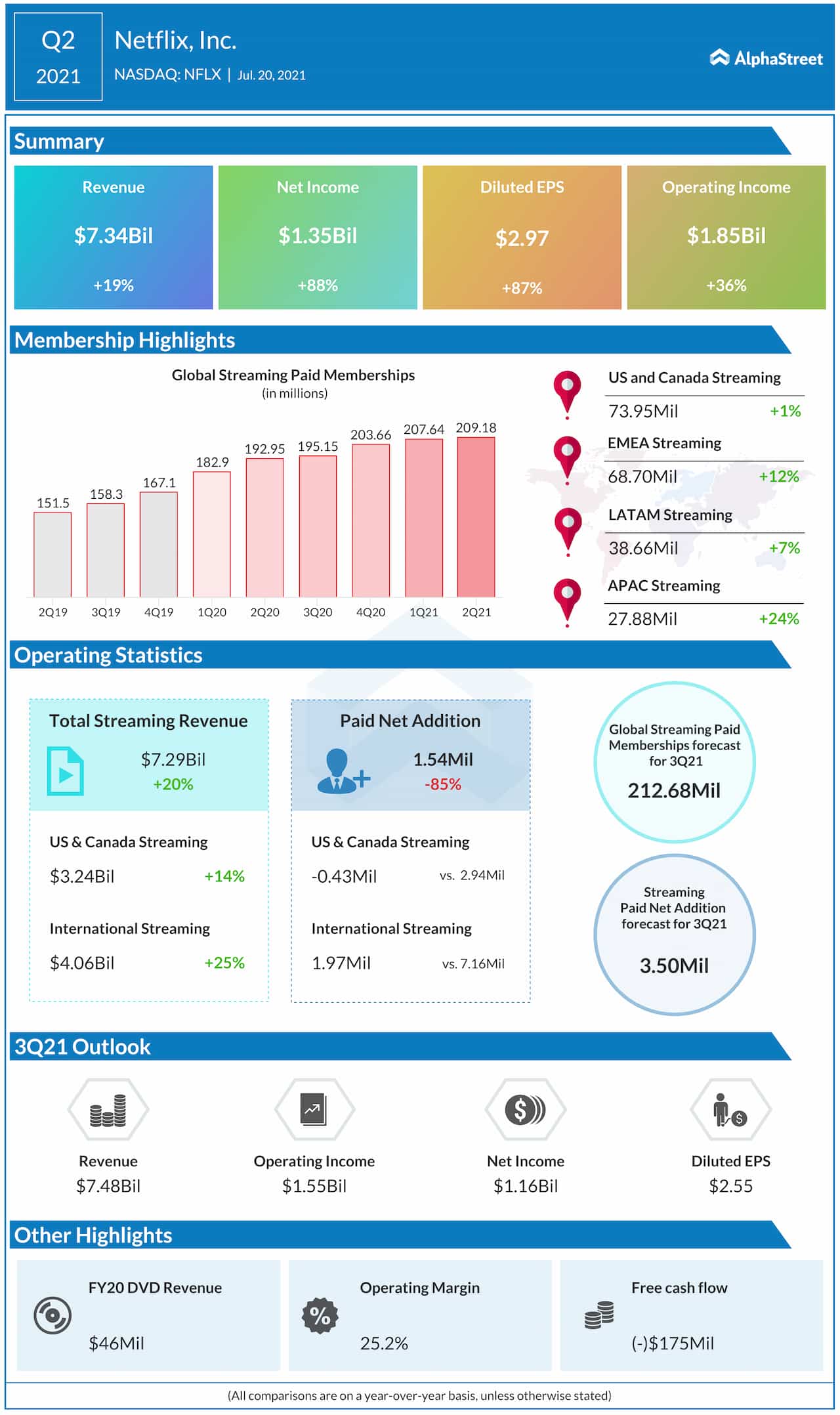 The impressive performance by popular shows like Army of the Dead and Fatherhood as well as series like Lupin and Who Killed Sara? has added to the management’s optimism. It has also offset the impact of production delays to some extent. According to the executives, competition can influence the business positively as the households are more likely to switch to streaming – by owning smart TVs and getting unlimited broadband – when multiple players offer services.

I think, ultimately, we are competing already with tons of forms of places that consumers can spend their hard-earned money on entertainment. And mostly, what we are looking at is in the specific calculus of how do we deliver more value, how do we provide a wider range of incredible stories at high quality and diversity of content that appeals to those consumers and appeals to more and more consumers around the world. And if we do a good job there, then ultimately, then we have the ability to go back and occasionally ask some of those members to pay a little bit more to keep that virtuous cycle going.

Netflix’s second-quarter report was a mixed bag in many aspects. At 209.18 million, global paid subscribers were up 8.4% year-over-year. Though it marked a faster growth than in the previous quarter, the beak-down shows the company lost around 430,000 users in the US and Canada. The subscription growth translated into a 19% rise in revenues to $7.34 billion. Both numbers topped the market’s expectations.  However, the company’s bottom line grew at a slower pace than estimated. At $2.97 per share, earnings were up 87% from the year-ago quarter though.

“VOXX International will double business in a few years”

Reflecting investors’ concerns over the unimpressive earnings performance, the stock suffered one of its biggest short-term losses after the announcement. The shares closed Wednesday’s session down 3% but stayed above their 52-week average.