Will the soda market ever recover from the drain?

Soft drink giant Coca-Cola reported a 20% fall in revenues in the most recent quarter, hurt by continued weakness in its beverages business in North America. The company posted a net loss of $0.66 per share, owing to charges related to the recent tax reform. Excluding the charges, pre-tax profit rose more than expected to $937 million, pushing up the stock prices.

Earlier, PepsiCo reported an increase in its fourth quarter profit, excluding income tax, as the impact of muted sales was more than offset by lower operating expenses. After incorporating the income tax provision, the company posted a net loss of $710 million.

The legendary rivalry between Coca-Cola and PepsiCo is a widely discussed topic in the business world. The later part of last century saw the beverage companies using every weapon in their arsenal to dominate the market, from product diversification to innovative marketing strategies.

The cola majors are staring at a new challenge now – customers drifting away from sugary soft drinks and turning to healthier alternatives, a trend that could change the course of the ongoing race. While there is no prize for guessing the losers, the main benefactors of the phenomena would be mineral water companies and health drink makers like Monster Beverages Corp.

People’s changing lifestyle and growing disposable income continue to be favorable factors for the $1,000-billion non-alcoholic beverage industry, at least in the foreseeable future. However, latest financial figures present a not-so-encouraging picture of the carbonated drinks segment of most soft drink makers, thanks to the growing obesity concern and health awareness among people. The outcome of that is a new vigor in the functional beverage and bottled water segments.

A revitalized Pepper Snapple, which produces a wide range of sodas and energy drinks, is likely to add steam to the cola war.

Dr. Pepper Snapple Group, the next contender in the soda race after Coca-Cola and Pepsi, last week announced its merger with Keurig Green Mountain, maker of the popular K-cup coffee. A revitalized Pepper Snapple, which produces a wide range of sodas and energy drinks, is likely to add steam to the cola war. The deal complements the emerging trend wherein traditional soft drink makers woo customers with various offerings throughout the day, starting with the breakfast coffee. While it is yet to be seen which direction this latest tie-up is headed, it will definitely put pressure on others to follow suit. Pepsi is already making ready-to-drink coffees for Starbucks, and Coca-Cola has a similar arrangement with McDonald’s. Soon, we might see coffee dispensers of soda companies next to their conventional soft drink fountains.

Beverage companies have been vying to come up with a caffeinated drink that is appealing to customers looking for an afternoon drink, mainly youngsters. According to market watchers, most millennials prefer a caffeine fix to the usual sugary soft drink. The experts are of the view that if the trend gathers momentum, the dominance of carbonated soft drinks would come to an end in a few years, and coffee would rule the roost. 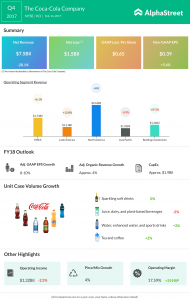 Coca-Cola has constantly been reinventing its products to retain market share, and the rebranding of Diet Coke was the most aggressive such move in recent times. However, customers were not amused by the fruit-flavoured avatars of Diet Coke, which itself had elicited a muted response when launched. In the UK, the company hopes to tackle the proposed sugar tax by launching a couple of new products and retain customer base.

The case of Pepsi is no different, whose sales are on a declining trend in the last couple of years amidst growing concerns about the health risks of carbonated drinks and the artificial sweeteners used in them. And, that is enough reason for any average customer to shift towards energy drinks and bottled water. There is a marked increase in the use of bottled water in the US, and statistics indicate mineral water consumption has surpassed that of carbonated drinks. For soft drink makers, it will be prudent to take steps to transform themselves into producers of ‘all types of beverages’.