Activision Blizzard (NASDAQ: ATVI) stock dwindled 1% after the bell as the  outlook failed to impress the street. However, q2 results topped analyst consensus. The gaming giant’s shares have recovered 20% after it touched a new 52-week low of $39 mark in February.

The company’s outlook for the third quarter and full-year failed to meet analyst estimates. Activision is expecting Q3 revenues to come in at $1.1 billion and adjusted EPS of 20 cents. On the flip side, analysts are estimating top line of $1.36 billion and non-GAAP earnings of 40 cents per share. 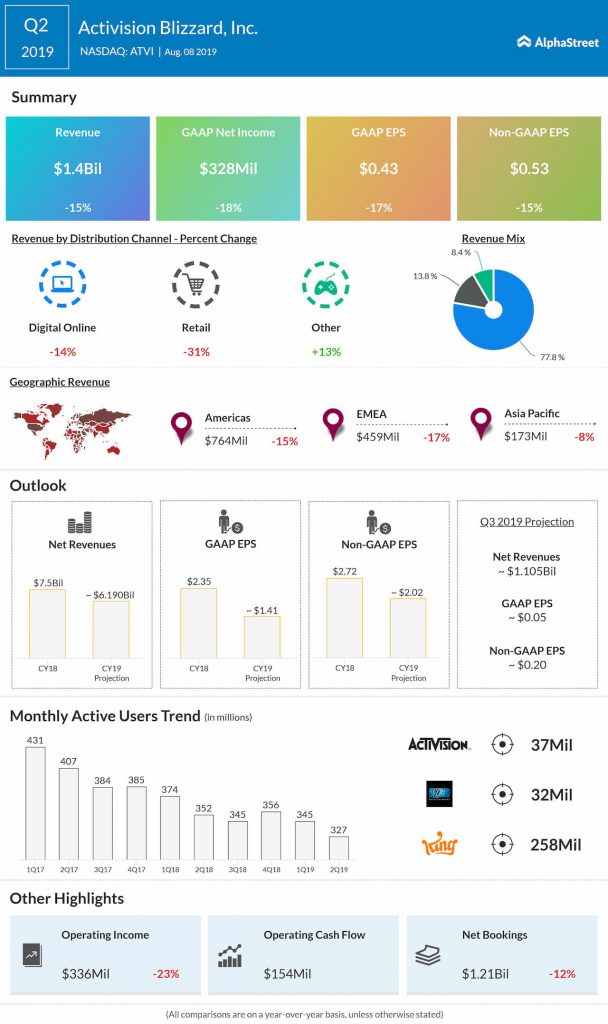 Revenue plunged 15% to $1.39 billion over last year and adjusted EPS was down 15% to 53 cents. The second quarter results came in ahead of the prior outlook provided by the firm and also eclipsed consensus.

Bookings, one of the key metrics tracked by the street, contracted 12% to $1.21 billion with digital channel bringing in 84% of sales. However, it surpassed $1.15 billion provided by the company last quarter.

Monthly Active Users (MAU) continued the declining trend from the first quarter, which is a concern for investors. With the absence of new gaming releases, the company is struggling to keep the engagement intact in the existing games. MAUs plunged 7% to 327 million over last year and was down 5% sequentially.

In-game sales and esports are emerging as tailwinds for the gaming industry. Out of the total bookings of $1.21 billion, 66% came from in-game sales, which is expected to increase in the near future. Last quarter, in-game sales brought in 64% to the net bookings.

Activision’s Overwatch League and Major League Gaming which is reported under “Other” segment grew 13% over prior year. Last year, this segment where esports revenues are reported brought in $607 million, an increase of 20% over the fiscal 2017 period.

Gaming research firm Newzoo expects esports industry to grow 27% in 2019 hitting $1.1 billion, with sponsorships contributing about 42%. The firm also added that the industry would generate $1.8 billion of revenues by 2022.

Last month, Electronic Arts (EA) first quarter results came ahead of estimates. It also benefitted from an one-time tax benefit of $1.7 billion for the fiscal year. Live services and subscriptions saw good growth, which is expected to be a tailwind for the gaming industry.

Earlier this week, Take-Two Interactive Software (TTWO) reported better-than-expected first quarter results. Revenue rose 39% to $540.5 million while bookings went up 46% to $422.2 million. On an adjusted basis, EPS was 27 cents, compared to 2 cents estimated by the street.