Activision Blizzard (NASDAQ: ATVI) stock has recovered 20% since early February after touching a new 52-week low of $39.85. Last week, Electronic Arts (EA) Q1 results came ahead of estimates. It also benefitted from an one-time tax benefit of $1.7 billion for the fiscal year. Live services and subscriptions saw good growth, which is expected to be a tailwind for the gaming industry.

Deal or No Deal

Last month, analyst Nick Licouris with wealth management firm Gerber Kawasaki mooted the idea of Walt Disney (DIS) acquiring Activision, which could be beneficial for both the firms. In an interview to Bloomberg, Licouris also added that Disney could benefit from the gaming firm’s growing esports business and it could monetize its proprietary film and TV content for developing new games. 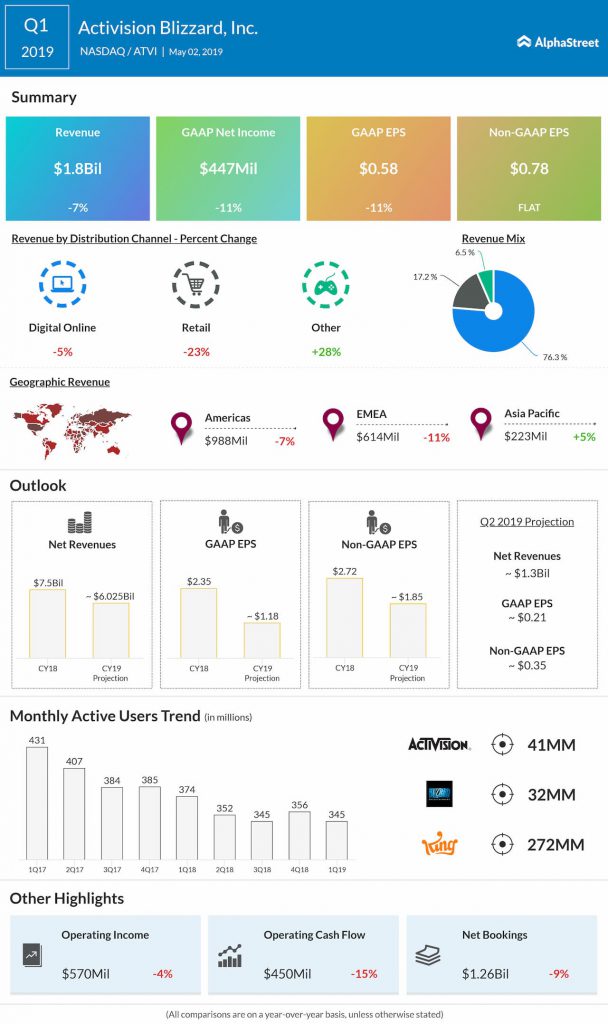 Analysts would be expecting more insights on this from the management on Thursday in the earnings conference call. It’s worth noting that Gerber Kawasaki owns about $4.3 million worth of Activision’s shares and holds 152,000 shares of Disney, which is worth about $22 million.

Read: Activision Blizzard stock down due to weak outlook despite Q2 earnings beat

Apart from the headline numbers, key metrics to track would be the bookings trend and monthly active users (MAU) and time spent per user. Last quarter, the company blamed tough comps for muted performance in bookings. MAUs at the end of first quarter stood at 345 million, decreasing both sequentially and over prior year period. The decrease in MAUs was felt across the board and daily average time spent per user stood at 50 minutes.

In-game sales and esports are emerging as tailwinds for the gaming industry. Thanks to the increasing penetration of smartphones globally and free-to-play games, the gaming market is going to see significant expansion and mobile gaming would have a large user base when compared to PC and consoles.

Last quarter, net bookings came in at $1.26 billion and about 64% was generated through in-game sales. This trend is going to continue in the near future which is going to bring stable revenues over the long term.

According to gaming research firm Newzoo, esports industry is expected to grow 27% in 2019 touching $1.1 billion with the sponsorships contributing about 42%. The report also added that the industry would generate $1.8 billion of revenues by 2022.

Activision’s Overwatch League and Major League Gaming which is reported under “Other” segment grew 28% over prior year. Last year, this segment where esports revenues are reported brought in $607 million, an increase of 20% over the fiscal 2017 period. Based on the track record, investors would be expecting the solid growth from the esports category in the second quarter.

Activision’s rival Take-Two Interactive (TTWO) is reporting its first quarter earnings for the fiscal 2020 period on August 5 after the bell.