After positive Q3 results, what lies ahead for Tesla (TSLA)?

In August, the company completed a 3-for-1 stock split, eliciting much interest among stakeholders

Tesla, Inc. (NASDAQ: TSLA), the company that pioneered electric vehicle technology, has demonstrated exceptional resilience to challenging market conditions, proving the skeptics wrong. Importantly, the company is going through a transitional phase, in terms of scaling production and expanding geographically.

Shares of the Austin-headquartered EV giant are currently trading at nearly half its peak value of November 2021. They experienced high volatility so far this year and have maintained a downtrend. The good news is that TSLA seems to be on the threshold of a sharp rebound. If experts’ forecast is any indication, the stock will gain more than 50% before the end of 2023.

The market had closely followed Tesla’s stock in the third quarter when it completed a three-for-one stock split, though the process did not change anything about the business or the stock’s performance. Post-split, the stock has become more affordable but the valuation still looks high. However, Tesla is a good long-term investment opportunity that is worth trying.

The company’s adjusted earnings rose sharply to $1.05 per share in the third quarter and topped expectations, as they did in each of the trailing six quarters. Meanwhile, the top line missed the view, despite surging 56% to $21.45 billion amid broad-based growth. At 343,830 units, total vehicle deliveries were up 42% annually, while production climbed to 365,923 vehicles. Another factor that contributed to the sales growth is higher selling prices. 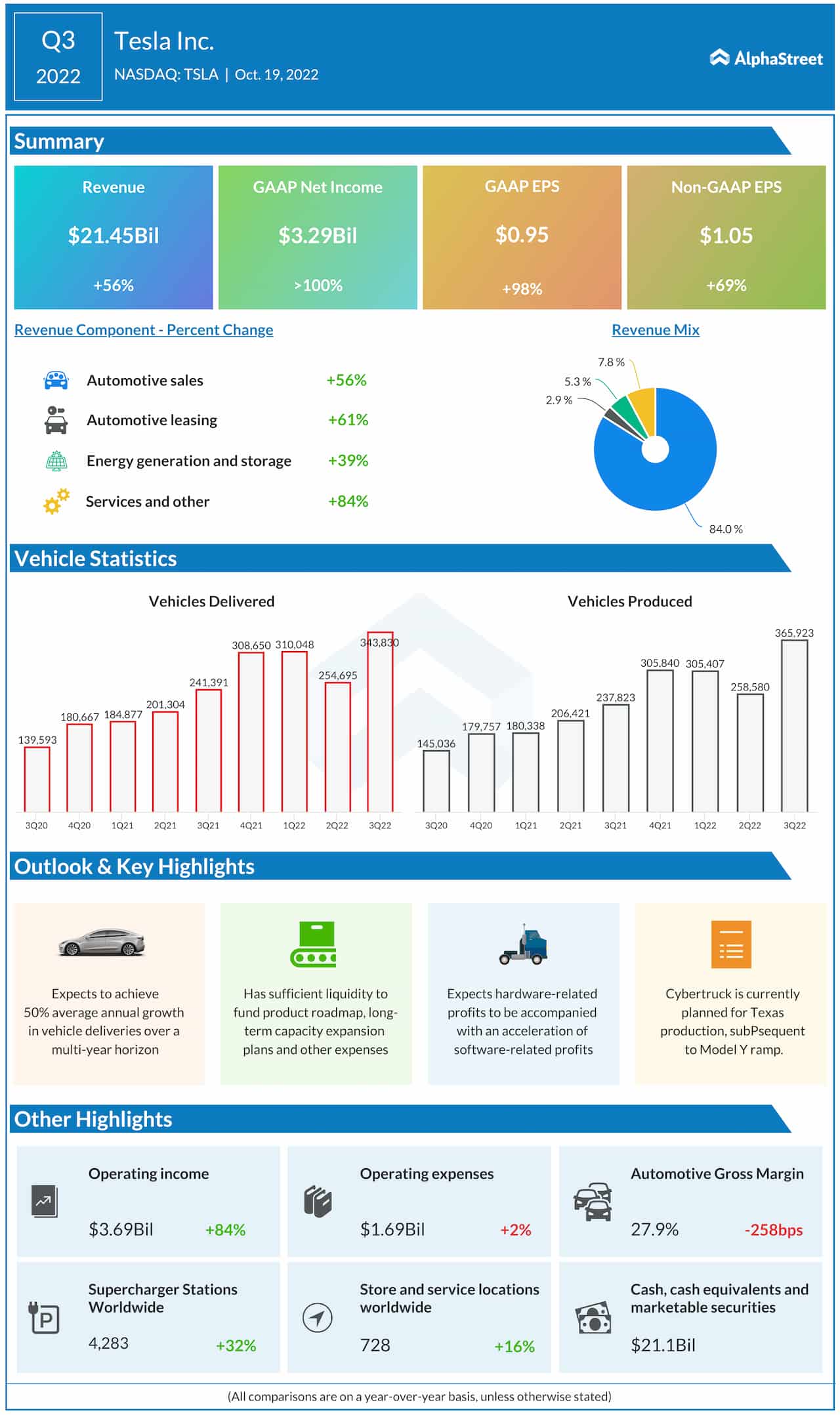 The sales miss can be linked to production delays caused by high raw material costs, unfavorable foreign exchange rates, and below-capacity output at the company’s new Gigafactories. These headwinds are temporary, which means the business is still on track to meet the management’s short-term targets, supported by aggressive expansion initiatives.

The fast-paced adoption of electric vehicles across markets and favorable government policies bode well for Tesla. The management is optimistic about the demand for the company’s products and expects to achieve 50% of its annual production growth target this year. But inflationary pressures and the Fed’s hawkish monetary policy, combined with lingering supply chain issues, might restrict Tesla from staying consistently on the fast track.

“On the delivery side, we do expect to be just under 50% growth due to an increase in the cars in transit at the end of the year, as noted, just above. This means that, again, you should expect a gap between production and deliveries in Q4, and those cars in transit will be delivered shortly to their customers upon arrival at their destination in Q1. Boston and Berlin ramp costs will continue to weigh on margins, although we expect the impact to be less than what we saw in Q3.”

Of late, the performance of Tesla’s services segment has been very encouraging – thanks to higher sales of used cars/part sales and a sharp increase in paid use of superchargers. The trend is expected to accelerate going forward, and the services division would emerge as a dependable revenue stream.

The third-quarter revenue miss didn’t go well with investors, and the stock suffered one of the biggest one-day falls this week. TSLA traded sharply lower on Thursday afternoon, after paring a part of the post-earnings losses.