After the recent rally, is Facebook (FB) stock a buy right now?

The sharp increase in the consumption of online content after markets went into lock-down mode came as a boon for internet companies like Facebook, Inc. (NASDAQ: FB). Defying concerns that the unusually high ad demand could be temporary, the social media giant stayed on the growth path even after the markets started reopening amid the vaccination drive. Renewed hopes of a faster economic recovery have added to the positive sentiment.

The company’s stock traded at an all-time high on Tuesday, after setting new records regularly over the years. The stock, which is considered a safe bet, remains as attractive as ever before — for those who can afford it. Though the valuation looks high, it is deemed appropriate at the current price. But, the shares are probably headed for a bigger rally this year – an estimated growth of around 12%. That is enough reason to grab FB before the next quarterly report, for the uptrend is expected to gain steam post-earnings.

Facebook’s first-quarter 2021 earnings release is slated for April 28 after the regular trading hours, amid high expectations as usual. Experts see earnings growing about 38% to $2.36 per share, on revenues of $23.54 billion. 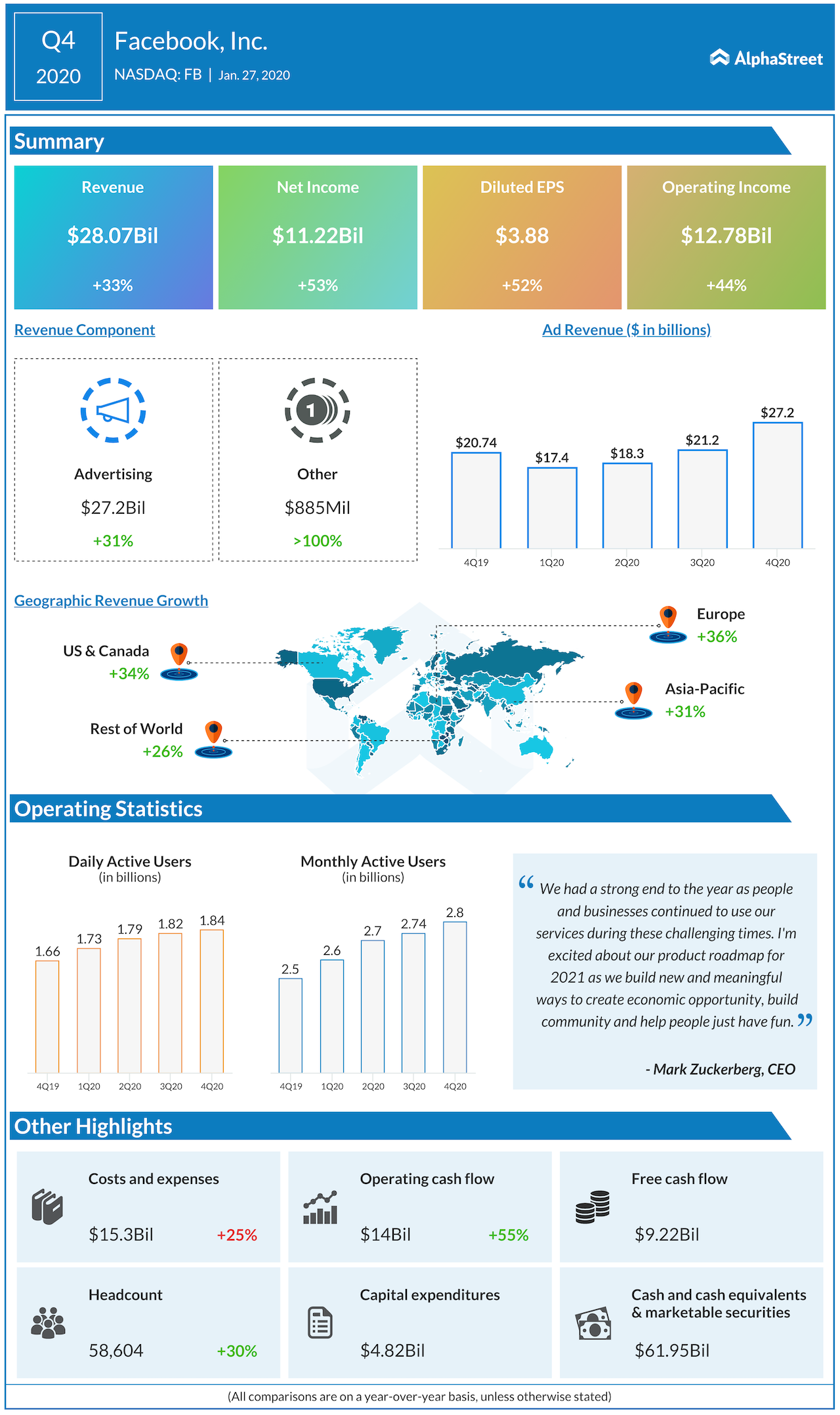 Going forward, advertising revenue should benefit from the ongoing shift to e-commerce and the growing consumption of online content. While it is estimated that the trend would continue even after normalcy returns to markets, it is too early to predict how things would emerge post-COVID. The continuing uncertainty does not bode well for Facebook and its peers in the technology industry. In addition, regulatory scrutiny and looming legal action for alleged misinformation on the platform and breach of privacy norms remain a major risk as far as the company’s future prospects are concerned.

“2021 has a lot of unknowns. We don’t know when vaccines are going to be widely available, when our teams will be back in the office or when our lives are going to start feeling normal again, but what I do know is that we are going to keep investing in and innovating on the big themes that I discussed here in order to put more power in the hands of people and small businesses. I personally believe that technology can unlock progress and opportunity and that the full story of the Internet has not yet been written,” said Facebook’s CEO Mark Zuckerberg during his interaction with analysts at the Q4 earnings conference call.

At the end of fiscal 2020, Facebook had around 2.8 billion monthly active users, after consistent growth over the years. The solid user engagement translated into a spike in ad revenues in the final months of the year when total revenue grew more than a third to about $28 billion. As a result, fourth-quarter earnings climbed 52% to $3.88 per share.

The stock once again crossed the $300-mark this week, driving up the company’s market cap to about $879 billion. In the past three months alone the shares gained about 15%, outperforming the S&P 500 index. They closed the last trading session up 3%.

Schlumberger Limited (NYSE: SLB) came up with its third-quarter 2021 results on Friday. Revenue increased to $5.8 billion from $5.2 billion last year. Analysts had expected revenue of $5.09 billion.