The renaming of Facebook to Meta Platforms, Inc. (NASDAQ: FB) has spurred speculation as to what effect the new identity would have on the company. The social networking platform’s first earnings report after the rebranding was a dampener for investors, who responded harshly to the unimpressive results and management’s weak outlook. Facebook’s stock suffered one of the biggest single-day losses soon after the earnings release this week.

The stakeholders were particularly concerned about the unexpected contraction of the company’s user base — the number of daily active user dropped sequentially for the first time in one-and-half years. The negative sentiment wiped off several millions of dollars from the company’s market capitalization. The good thing about the selloff is that FB has become more affordable now.

Facebook had suffered similar setbacks in the past but bounced back every time aided by the strength of its innovation-focused business model and robust user base. Since the company has become much more than a social media platform now, there is a greater scope for expansion. Facebook is still a safe investment option, and the recent dip in valuation can be seen as a unique opportunity to go for it. The company is unlikely to disappoint those looking to hold for the long term. The consensus target price points to a 33% growth this year.

Despite the shaky user base, fourth-quarter revenues increased 20% to $34 billion. Most of the growth came from the advertising business though it has been hit by COVID-related supply chain issues. The top-line performance also surpassed expectations, but that did not translate into margin growth due to a spike in operating expenses. Net profit declined to $10.3 billion or $3.67 per share and came in below experts’ projection. 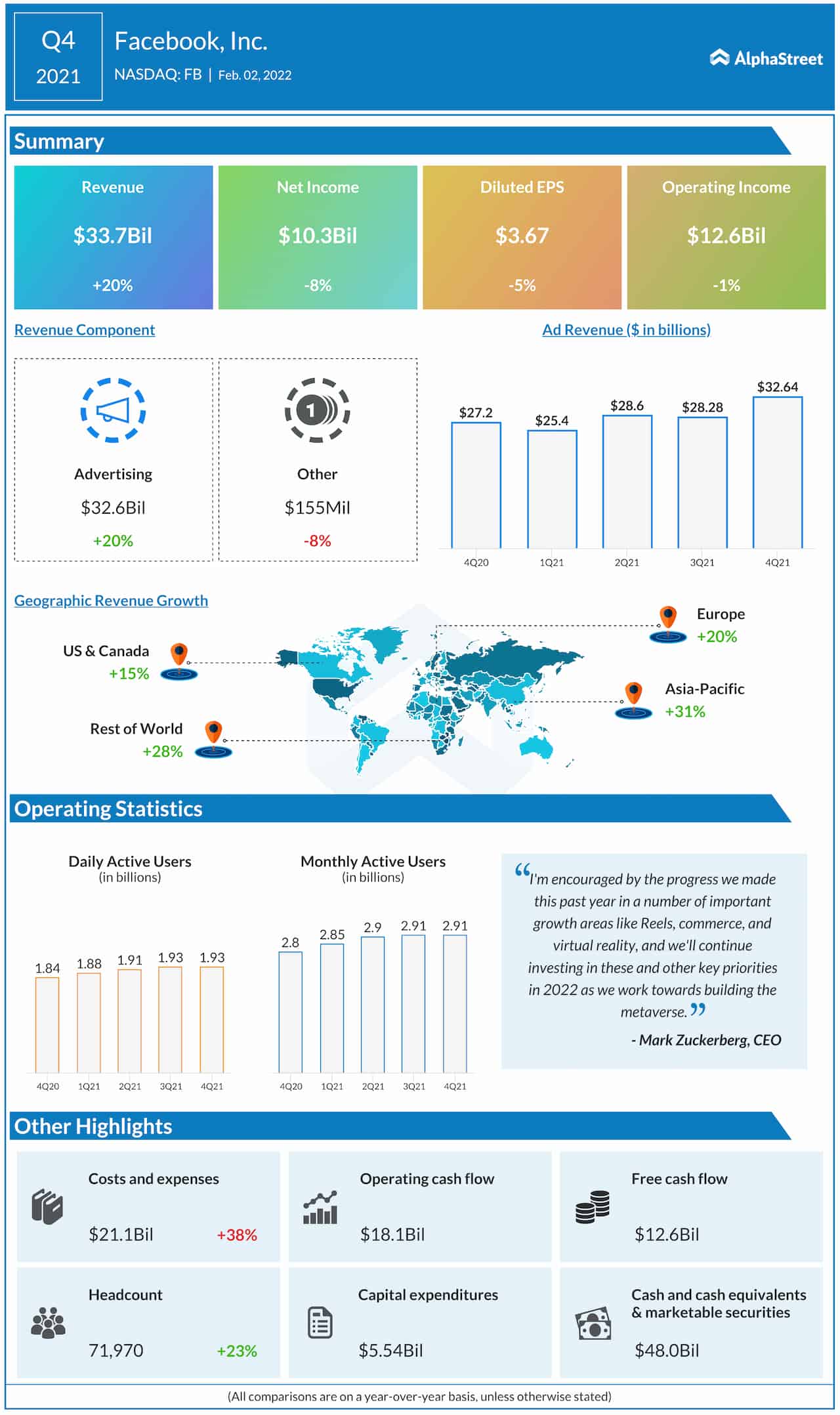 “As we enter 2022, our focus is where it has always been, building products that help people connect and businesses grow. We’re making long-term investments to evolve our business and continue to drive real value for our partners. In the coming year, we’ll continue to invest in things that improve ad performance for our clients in short-form video like Reels and in making the commerce experience better for consumers and marketers on our platforms.”

The company has made significant progress in areas like virtual reality and artificial intelligence lately, which complements its mission to develop the much-hyped metaverse. Meta was announced a few months ago as a platform that brings together all of Facebook’s apps and technologies under one brand. It is designed to allow users to exchange immersive experiences virtually.

But the near-term outlook for the company is not very rosy, with the management warnings of multiple challenges in the early months of the current fiscal year, such as the shift to lower-income products due to the impact of inflation on advertisers, revenue loss from changes in Apple’s iOS privacy policy and rising competition.

Facebook’s stock continued the dismal performance on Thursday and dropped as much as 24% in the afternoon. It is down 27% from the levels seen at the beginning of the year.