Facebook (FB) has what it takes to sail through tough times. Here’s why

Social networking companies got a major boost from the shelter-in-place orders that came during the pandemic, at a time when the industry was facing intense regulatory scrutiny amid concerns over data privacy and unethical business practices.

Shares of Facebook, Inc. (NASDAQ: FB) suffered a selloff this week following the company’s mixed earnings report, extending the recent downturn. The stock had headed southward after hitting an all-time high last week, reversing most of those gains. Investors were disappointed by the management’s weak guidance indicating lower-than-expected revenues for the current quarter.

However, the pullback does not imply that FB is losing its sheen, rather the stock has become more affordable and that is good news for prospective buyers. Meanwhile, the current target price represents a double-digit increase from the last closing price. Also, the company is poised to maintain its impressive profitability in the foreseeable future, wich makes it as attractive as ever, from an investment perspective.

Facebook’s operations and content policy have been under scrutiny for some time amid allegations that the social media giant failed to ensure security and protect user data. But the controversy is unlikely to stop the company from taking forward its aggressive expansion strategy.

A key highlight of this week’s earnings release was the addition of $50 billion into the share repurchase program. Third-quarter revenue climbed 35% year-over-year to $29 billion, mainly reflecting the stable demand for online advertising, but fell short of expectations. Earnings rose 19% to $3.22 per share and topped expectations. There was a further increase in monthly active users, though modest, to 2.91 million but it is below estimates. 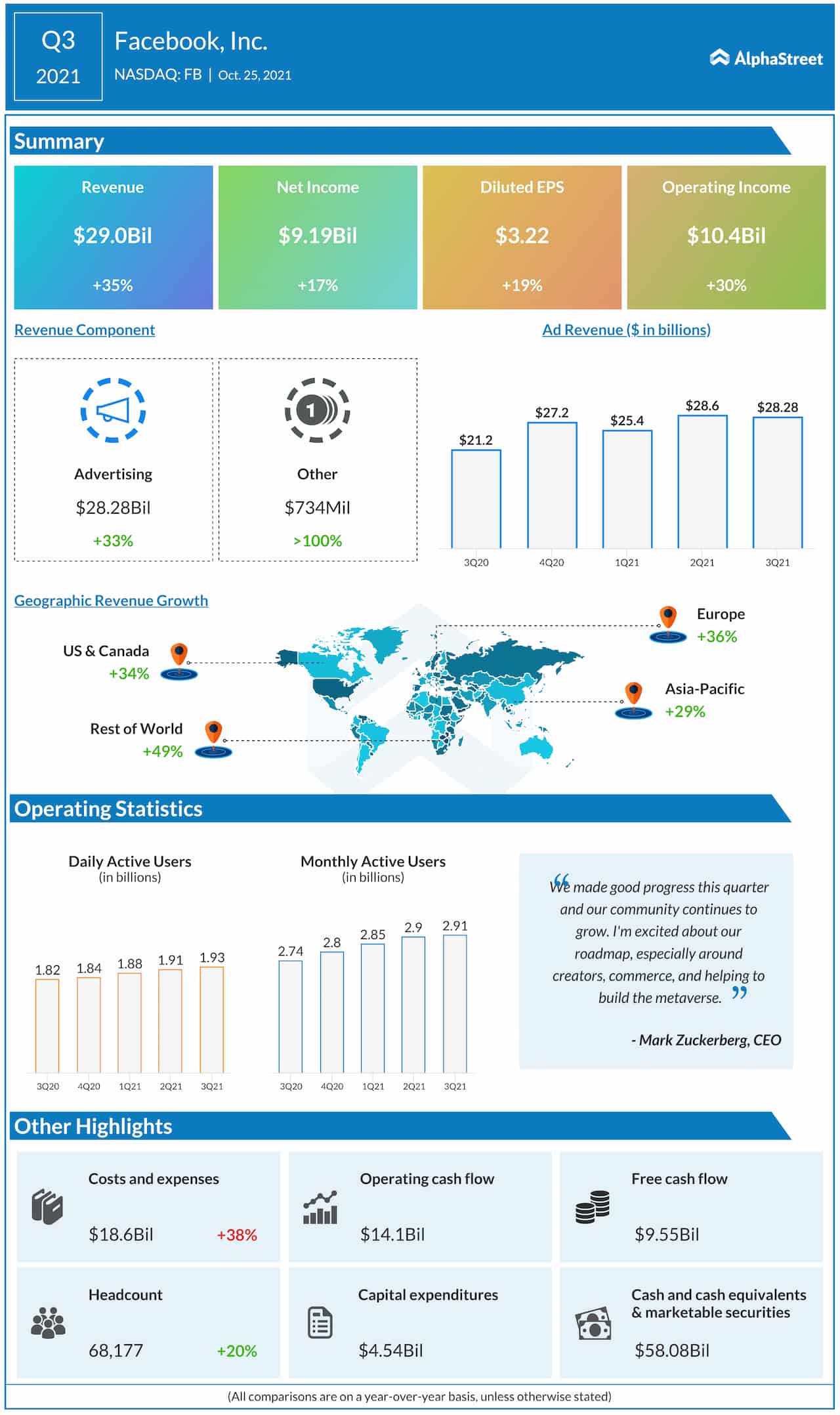 Meanwhile, there are concerns that the new privacy restrictions set by Apple, Inc. (NASDAQ: AAPL) for its iOS operating sysem might affect Facebook’s revenue performance going forward. The company is already facing criticism for alleged misinformation, fake news, and hate speech on the platform. Adding to its woes, a former employee recently unleashed a scathing attack, claiming that the management is aware of the platform being misused by some users.

Good criticism helps us get better, but my view is that what we are seeing is a coordinated effort to selectively use leaked documents to paint a false picture of our company. The reality is that we have an open culture where we encourage discussion and research about our work so we can make progress on many complex issues that are not specific to just us. We have an industry-leading program to study the effects of our products and provide transparency to our progress because we care about getting this right.

The recent developments can put pressure on Facebook to do more to clean up its platform and revisit the business strategy to plug loopholes. Interestingly, there were reports that the company is planning to change its name, in a move aimed at assuming a new identity. Recently, it suffered an unusualy big outage that lasted for several hours, leading to a global communication shutdown.

Despite experiencing weakness, Facebook’s shares have stayed above the 52-week average. The stock, which lost about 11% in the past 30 days, traded at a five-month low on Wednesday after closing the previous session at $315.81.