AK Steel to report Q4 earnings on Jan 28. What to expect

Steel manufacturing company AK Steel (AKS) is scheduled to report fourth-quarter results on January 28, Monday, after the closing bell. Analysts expect the company to post earnings of 12 cents per share on revenue of $1.7 billion.

During the last reported quarter, the company had reported earnings of 21 cents per share on a 16% increase in net sales to $1.73 billion. Though the results came in above analysts’ expectations, investors were unhappy with the guidance and sent the stock tumbling. 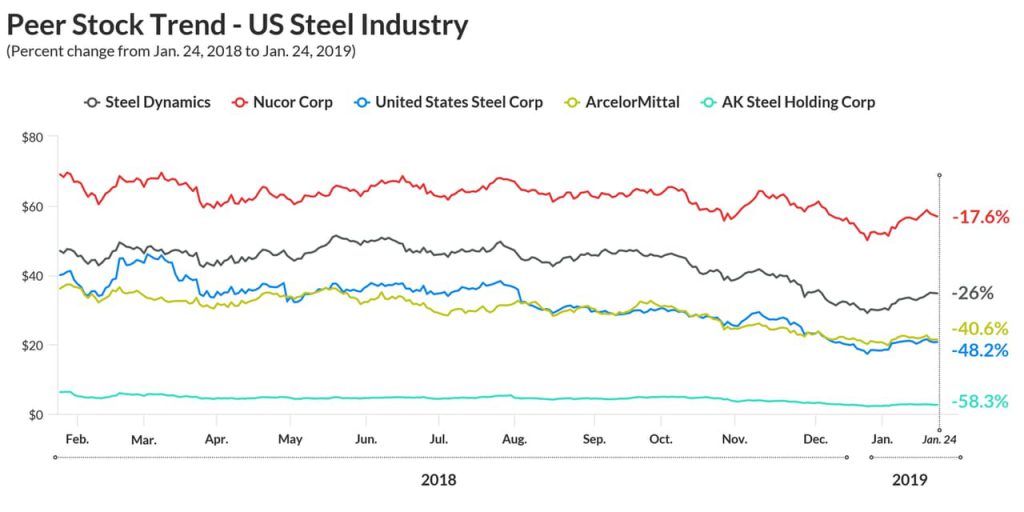 Apart from the company’s vague promise of capturing more price increases on contract renewals, the outlook felt weak by industry standards. The fourth quarter is generally considered a weak period for steel companies and a decline in steel prices during this period presumably prompted the company to give a pessimistic view for Q4.

The stock has tumbled 58% during the trailing 52 weeks period. During the same period, competitors ArcelorMittal (MT) is down 42% and US Steel (X) is down 48%. Nucor (NUE), meanwhile, has managed to resist the industry-wide weakness to some extent and is down 16% in the last 12 months.

Though the industry has benefited from President Donald Trump’s initiation of tariffs on steel imports, cut-throat competition among domestic players are weighing on steel prices.

The company, which has the automotive industry as the main end-market, is expected to have renegotiated some unclosed contracts with higher pricing in the fourth quarter. Look out for management comments on how much these talks have been successful.

Going by analysts’ recommendations, you should probably hold the stocks if you already own a stake going into the earnings.