Akamai Technologies’ (AKAM) shares were up above 7% during the post-market trading hours as the company reported strong results for the third quarter beating analysts’ estimates.

The cloud services provider reported 7% jump in revenues to $670 million helped primarily by the strong performance from its cloud security offerings. Akamai’s adjusted earnings spiked 47% to $0.94 per share primarily due to reduced tax provisions as a result of tax reforms. The company beat analysts’ estimates on both the sales and earnings front.

Cloud security business continued its stellar performance in the third quarter. Revenue in the division jumped 37% year-over-year to $169 million. Cloud security services revenue is expected to touch $700 million annually due to increased demand from its customers. Akamai also plans to invest more to augment its cloud security offering which is expected to yield better margins. 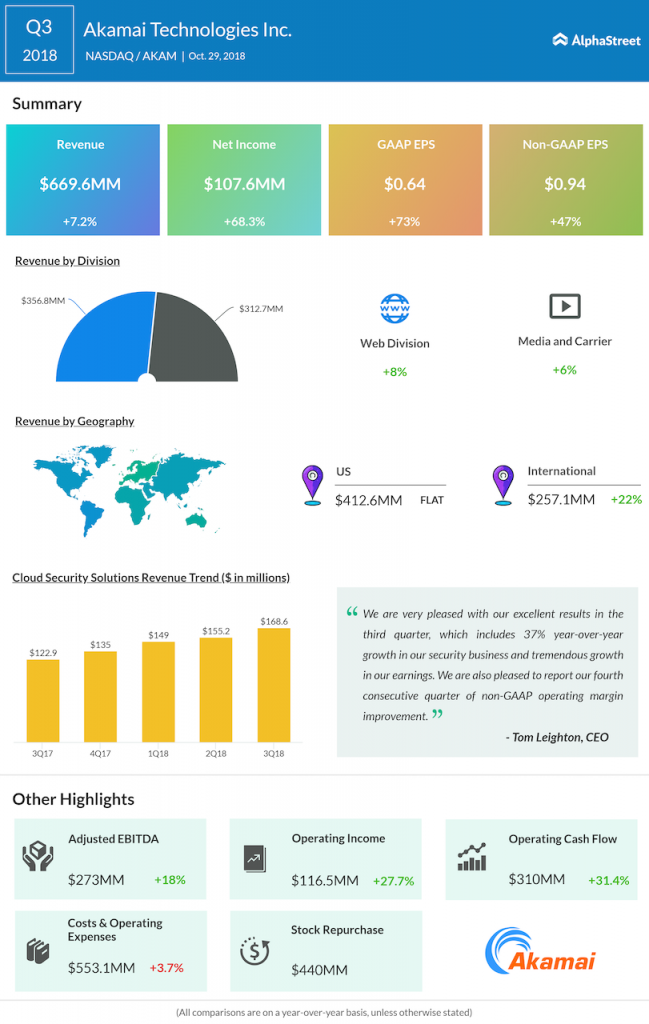 Revenue from the web business increased 8% to $357 million, aided by new product sales and cloud security solutions. Strong growth in traffic from gaming and video clients lifted Media and Carrier division sales by 6% to $313 million. Akamai also added that it’s on track to achieve 30% margins in 2020.

However, revenues from Internet Platform continue to be under pressure as some of its customers have started working on an in-house platform to handle traffic, which has resulted in a 15% drop in revenues. It’s worth noting that Akamai counts six tech giants Amazon (AMZN), Apple (AAPL), Facebook (FB), Google (GOOGL), Microsoft (MSFT) and Netflix (NFLX) as Internet Platform clients.

On the expense front, Akamai saw a 7% increase in both R&D and sales & marketing offset by a decrease in general & administrative expenses.

The company also has announced a new $1.1 billion share repurchase program which is expected to kickstart from November 1, 2018, and continue till December 31, 2021.

For the fourth quarter, analysts expect Akamai’s earnings to be $0.90 per share on revenues of $703.54 million since fourth quarter is seasonally strong for the company. For the fiscal year 2018, the company’s revenues are forecasted to touch $2.7 billion and earnings are estimated to be $3.34 per share. The company’s stock is up about 17% during the last 12 months.