Alphabet, the parent company of Google, touched its high of $1,210.44 on Friday. The stock was up about 14% year-to-date and about 23% in the past 52 weeks. Alphabet is set to report its quarterly earnings on July 23 after the bell and is expected to deliver results that will exceed the consensus view. However, the stock was in red today’s regular trading session as the reports suggested that European Union might slam the company with a huge fine sometime this week related to Android monopoly case. 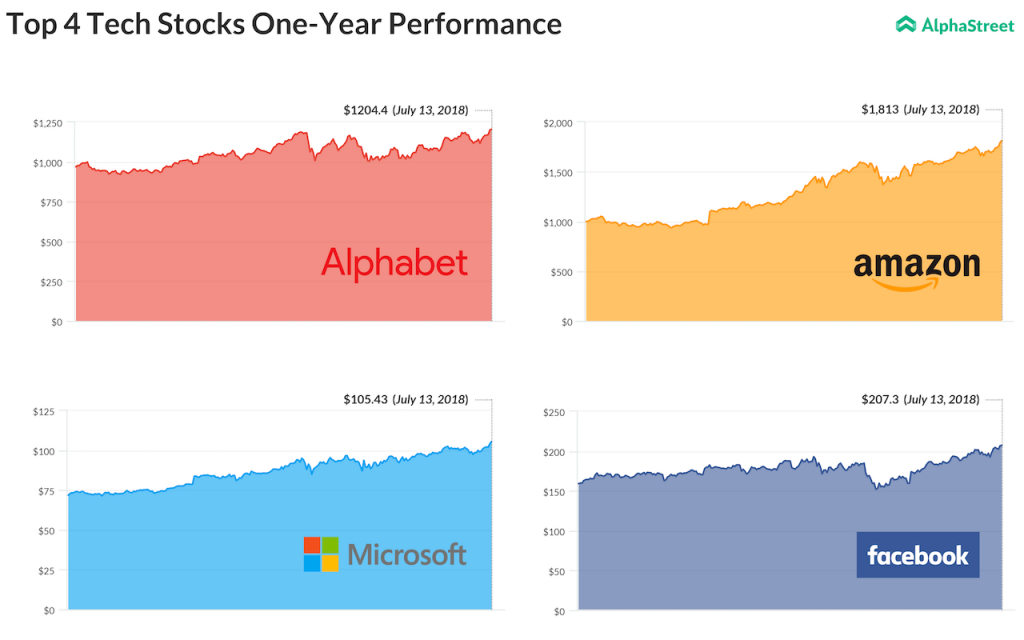 Shares of e-commerce giant Amazon, whose 36-hour Prime Day sales started at midday today, reached its new yearly high ($1815.3) on Friday. The stock rose over 50% in the year-to-date period and its growth skyrocketed to above 80% in the past one year. With its recent moves to hold a strong footprint in the healthcare space, strong growth in AWS and continued acceleration in online sales, the company is expected to surpass the analysts’ expectations when it reports results on July 26.

Social media juggernaut Facebook, which was hurt by the Cambridge Analytica data scandal earlier this year, registered its 52-week high ($208.43) on Friday. The company’s stock grew around 18% so far this year and about 30% in the past one year. Analysts expect Mark Zuckerberg’s firm to overcome the pressure from the regulatory bodies and report upbeat quarterly results for its second quarter on July 25.

Microsoft, which last month acquired open-source coding platform GitHub, touched $105.6 on Friday. The stock had climbed 23% in the year-to-date period and 44% in the past 52 weeks. The company is slated to announce its quarterly results on July 19. Microsoft has reported strong quarterly results in the recent times on the back of strong growth in the cloud business and gaming revenues, which are expected to help them deliver strong top and bottom line numbers once again.

Related: What to expect from Microsoft on Thursday